Seville, or Sevilla, as the Spanish call it, is the capital city of Andalusia, which sits in the southern part of the Iberian Peninsula. Founded as the Roman city of Hispalis, it later came under Muslim rule as Ishbiliya. After several successions and rulers, it was eventually taken over by the Christians under the Kingdom of Castile. After the Americas were discovered, Seville was an economic force within the Spanish Empire.

As the fourth-largest city in Spain, Seville boasts three UNESCO world heritage sites, Seville Cathedral, the Alcazar palace and the General Archive of the Indies. In addition, the city is geographically defined by the only navigable river in the whole of Spain, the Guadalquivir. Seville is a city of architectural beauty, traditional food culture and a rich historical narrative – enough to keep any visitor enthralled!

Things to do in Seville

For great architecture you can’t beat this cathedral. The largest cathedral in the world, this former 12th century mosque is now a Roman Catholic cathedral, a grandiose structure built to proclaim the city’s wealth. At 42 metres, the Seville Cathedral boosts the longest nave in Spain. An extravagant bell tower called La Giralda, was once the former mosque’s minaret and is one of Seville’s most iconic landmarks.

For your travel planning: You can access the Cathedral easily by using the tram, bus or metro city services. 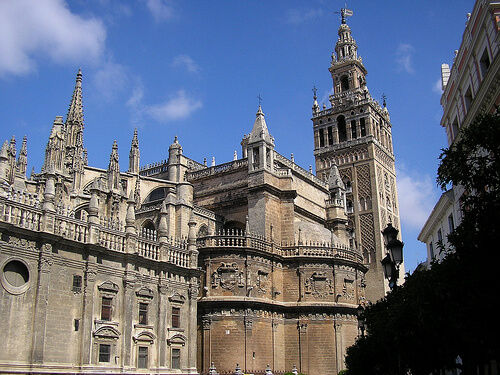 Listed as a UNESCO world heritage site, the palace dates back to medieval times and has been rebuilt repeatedly over its 11 centuries of existence. The sense of stepping back in time is hard to beat. Where else could you say you’ve wandered through the very room where Christopher Columbus planned his journey to the Americas? The Alcazar Seville is also home to an incredible array of eastern-style gardens, which are open until 7pm between April and September. It’s hard to imagine anything more romantic than wandering through the Moorish courtyards, intricately designed walkways and sweeping arcades as a warm summer day draws to a close. 🙂

For your travel planning: The Alcazar can easily be reached on foot from most parts of Seville city centre.

Seville’s famous Science Museum and is well worth a look. It houses three main exhibits on Geology, Invertebrates and the Whales & Dolphins of Andalusia. It also has a breath-taking planetarium if you’ve always fancied yourself as a bit of a star-gazer! Be sure to check with your hotel for discount entry tickets.

For your travel planning: The city’s Metro service has just one line. The metro stop is Puerta de Jerez, Prado.

How about a festival? Visit in April for the Feria de Abril. This festival is just after the Santa Semana Easter festival and is one huge party. A fair is held near the river and the locals set up canopies (Casetas), which are beautifully decorated with bright colours. During the day horse-drawn carriages parade through the streets with the drivers in traditional Spanish dress.

For your travel planning: There is a dedicated bus service for the Feria de Abril which operates from the Prado de San Sebastián station and drops passengers by the entrance to the fair.

Set inside an 18th century palace, The Museo del Baile Flamenco stands in homage to its namesake – the uniquely Spanish art of Flamenco dancing. Its corridors and hallways are filled with art and memorabilia, including photos, portraits and costumes, all celebrating the important part that this passionate dance routine has played in Spanish culture. There are also regular workshops, Flamenco dance classes and evening performances. The Museo del Baile Flamenco is open including holidays, from 9am-7pm April to October and then 9-am-6pm November to March.

For your travel planning: The museum can be reached via the local tram and bus services.

If you still need ideas, here are three more things to do in Seville:

If you’re a sports fan Seville has two football teams, Sevilla FC and Real Betis Balompie, so why not see if you can catch a game?

And for the kids, (or the kid in you), take a trip to the Isla Mágica Theme Park. This is conveniently located in the heart of the Seville, a quick walk from the centre, or also reachable by car.

And before I forget, please don’t forget to get lost in the old city. That’s part of the fun, as Seville was designed to confuse invaders. And from a very harsh point of view any tourist is an invader! 😉 To give you an example: I was thoroughly looking for thethree Roman columns and couldn’t find them. In the moment, that I gave up, I walked around a corner and there they were! Of course you have to use a paper map. With GPS it’s only half the fun.

How to get to Seville Spain

By Car: Seville is easily accessed by car from several motorways, both with tolls and toll-free. Because of the lack of parking, narrow one-way streets and traffic restrictions, it is advisable to leave the car in your hotel during your stay.

By Bus: There is a very efficient and punctual regional bus service to and from the Prado de San Sebastián bus station. Also, there is the Plaza de Armas station and this operates both national and international schedules daily. From the airport you can get the Especial Aeropuerto, a special airport bus which operates every 30 minutes.

By Train: There are high-speed rail services with a journey time of around 2.5 hours between Madrid and Seville. The AVE rail runs to Seville via Zaragoza from Barcelona and this is a journey of about 5.5 hours.

When is the best travel time to Seville Spain?

On average, the weather in Seville tops off at around 25C (77F). However, the Andalusia region can get extremely hot during the summer months of June-September, with the temperature in Seville peaking at a scorching 35C (96F). The best time to visit Seville is March-June, when the Seville weather is bright and dry, but not uncomfortably hot.