Spain’s vibrancy, history and diversity make it one of Europe’s most fascinating destinations. With a wide variety of things to do that cater to all interests and tastes, Spain promises an unforgettable vacation. With infinite reasons to visit – ranging from the southern mountains to the culinary adventures – what follows are some of the must-see Spain tourist attractions.

Gaudi’s intricate and elaborate Roman Catholic Church is the most visited monument in Spain, and arguably the country’s best attraction. The dramatic exterior incorporates aspects of Gothic, Catalan Modernism and Art Nouveau architecture, creating an unparalleled façade. Gaudi designed the interior as an urban forest, using colourful pillars to support a detailed canopy, and the result is truly fantastic. Though construction began in 1883, this contentious church has yet to be finished – optimists predict the late 2020s for possible completion. It is however fully functioning and visitors are welcomed daily.
For your travel planning: Once in Barcelona, visitors can either hire a taxi or take the Barcelona Metro to the Sagrada Familia stop on both the L2 (Purple) Line and L5 (Blue) Line.

A trip to Spain would not be complete without sampling a variety of cured hams. Jamon Iberico is among the most exclusive and expensive, having been cultivated from Iberian pigs that freely roam oak forests of Spain’s southern mountains and are fed a variety of herbs and olives. Top quality ham – marked by the word bellota – is cured meticulously for 36 months before being sold almost exclusively in Spain. Jamon Serrano by contrast comes from a landrace breed of white pig. A delicacy since the Roman Empire, this ham is cured for 6 – 18 months prior to selling it internationally.
For your travel planning: Jamon is widely available at bars and restaurants, but Museo del Jamon in Madrid (Calle Gran Via, 72) offers the best experience. The restaurant can be accessed by taxi or by taking the Metro to Plaza de España (Line 3 – Yellow). 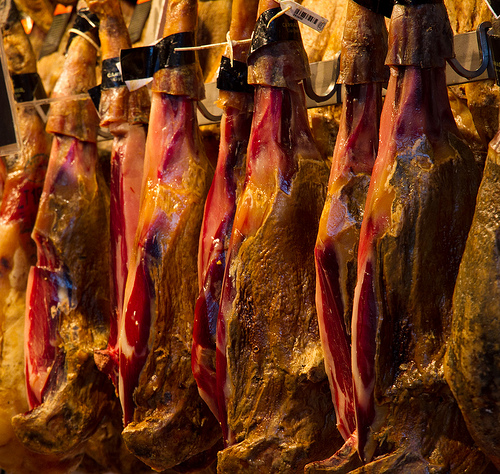 Fine white sand, clear waters and a seemingly infinite number of restaurants serving tasty pintxos (tapas) create the ideal environment for relaxation. Heralded as one of the top city beaches in Europe, and certainly the most accessible beach in Spain, this is an excellent complement to the country’s historical tourist attractions. A one-hour hike to the Statue of Christ offers a break from lounging, a spectacular view of the bay, and a drink at the local bar.
For your travel planning: Domestic flights fly daily from Madrid and Spain to Bilbao, the nearest airport. Bus routes from major cities are also available, and significantly less expensive than the flight.

Zirid Sultans initially constructed the Alhambra Palace in the 13th century, and the palace has since transformed alongside Spain’s distinct history. Today, the palace is a fusion of Islamic architecture with Christian reconstruction and landscaping. Red brick walls contrast the lush and expansive gardens surrounding the palace, among which visitors can wander endlessly for hours. A variety of ornate rooms cleverly integrate light, space and colour to create a unique and memorable European palace.
For your travel planning: Located just outside the city of Granada in the province of Andalusia, visitors can either take a taxi, walk a pleasant 1km, or take routes 30 or 32 on the city bus. Get there early in the day, because the amount of available tickets per day is limited!

Events: Running of the Bulls, Pamplona

Annually, beginning on July 7th, Spain descends into a weeklong frenzy over the San Fermin festival and the official start of encierro (running of the bulls). The 826-meter fenced course travels through the old city and culminates in the bullring. Fireworks, “big-head” parades, red wine, Basque sporting events and bull fighting permeate the rest of the festival, making for an explosion of Spanish and Basque culture. For those with enthusiasm and a sense of adventure, this is a celebration not to miss.
For your travel planning: Pamplona can be reached either by domestic flights from Madrid and Barcelona or by bus from major cities. Flights and accommodation should be booked in advance, given the festival’s popularity.