Hue is the former imperial city of Vietnam. It has to be noted though that contemporary Vietnam’s territory is not the same as the empire’s. The city harbours a large palace, which resembles that of China’s Forbidden City, but is substantially more decayed. Piece by piece it is being restored to, perhaps one day, shine like it did in its heyday.
Much of it was not destroyed until came the Indochina War after the 2nd World War, or as it is called in contemporary Vietnam, the Anti-French Resistance War, and during the 1960s came the Vietnam War. 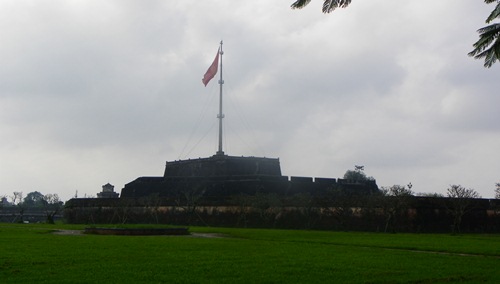 At the entrance to the former imperial palace (officially it is called imperial citadel) flies a giant Vietnamese flag. Perhaps this is supposed to clarify who is now in charge of the country.

The palace moat is also gigantic and a bridge over the moat leads to the palace entrance.

This is what it looks like once you have entered the palace grounds.

And this is a photo of the grounds themselves. 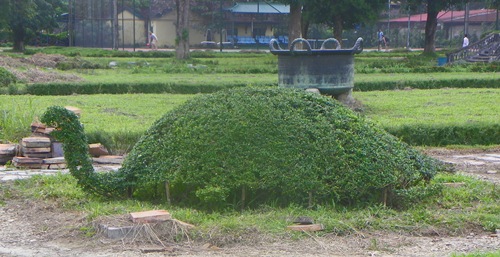 The gardeners are creative. Whether this tortoise has been around since the emperor’s days is beyond my knowledge.

One of the side palaces is still in good condition. I am not sure of its purpose. Perhaps it used to be home to the emperor’s mother, his concubines, or other relatives. In any event, the dragon ornaments on the roof are beautiful.

Outside of Hue Vietnam there are imperial tombs, which can be visited. The best way to do this is by boat, but one has to allocate a whole day for the trip. Organizing it is no problem. Throughout Vietnam, the hotels like to sell tours and they often sell them for less than the travel agencies. It is also possible to rent a bicycle, for those who prefer this mode of transportation.

For those who are pressed for time it is possible to tour the citadel and the tombs on day one. And then see the former demilitarized zone (DMZ), on the former border between North and South Vietnam north of Hue, on day two.

Otherwise Hue is an average Vietnamese city, a little less hectic than Saigon, but with enough going on. A walk along the perfume river (Huong Giang) is recommended. From there you can dive into the various markets and shops in the side streets, and be impressed by their hustle and bustle. There are also a few floating restaurants, where you are catered to at fairly reasonable prices. But go as a group, otherwise you’ll feel forlorn at one of their huge tables. The look of these restaurants is similar to the typical Chinese group or family restaurant.

For your travel planning: If you are starting off from Saigon or Hanoi, booking a flight is recommended. Vietnam Airlines offers good rates and is also a secure airline (3 out of 5 stars according to Skytrax, as of August 2013).
Travellers, who have more time and are prepared to spend a little more for the resulting comfort, can also get there by train and are rewarded with beautiful landscapes, which are found all along their journey.
If you are already in the area, in my case Hoi An, you can also travel by bus.