Does Canberra Australia deserve its own article?

I think so. Canberra in the province Australia Capital territory is certainly not everybody’s cup of tea, since it was planned as Australia’s capital from its conception. And planned cities have had a tough time coming to life ever since the dawn of time. Yet, St Petersburg, in Russia, is another example of a planned city and no one would suggest not visiting the city for that reason.

So what to do in Canberra Australia?

My favourites were the symmetries, which can be found all over the city. Several avenues, interrupted on occasion by rivers, run straight as an arrow across Canberra. The longest is almost seven kilometres long. This makes for some great photo motives. 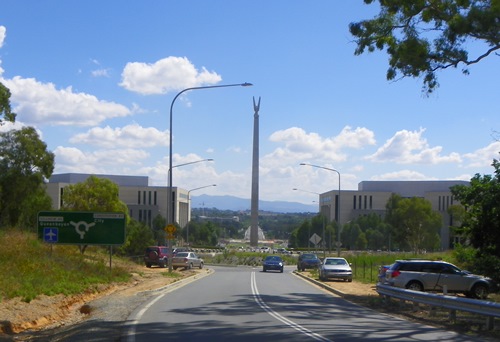 The Australian-American Memorial in the shape of an obelisk. Behind it, Kings Avenue, which eventually leads to the parliament.

So one of the fun things to do in Canberra Australia is to grab your camera and make some impressive Canberrra pictures. And another good thing: Except for your rental car or public bus coasts this is one of the Canberra things to do for free. 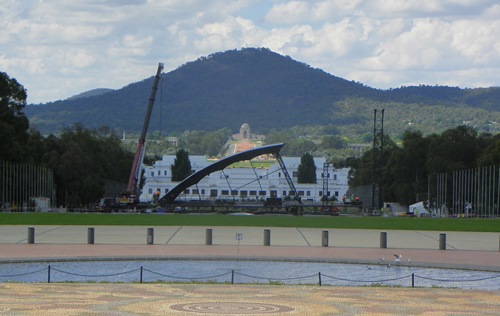 Photo from the new parliament towards the old parliament and in the background the Australian War Memorial.

The (new) parliament’s huge forecourt is also a great place to play around with the camera.

All around Capital Hill, there are, aside from the (new) parliament at the centre, further buildings typical for a capital city, such as Australia’s High Court, the National Gallery of Australia, the National Library and the Questacon, an interactive technology and natural history museum. Most places are open between 9 am and 5 pm. To visit the parliament one has to endure the security checks and the waiting times can be long. A good alternative is therefore the old parliament, which was in use until 1988 and is now a museum. 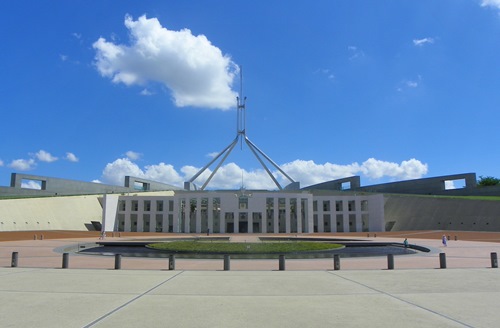 It is more than just a monument. It also contains a museum about the Australian army.

Of those Canberra Australia has more than enough. And most of them are beautifully designed. Stop on a whim when you like something and explore the grounds.

How to get to Canberra for your travel planning

To get to Canberra and to be able to stop in places you like en route it’s best to have your own car, a rental car for example.

Canberria Australia weather: When is the best time for a visit?

During the Australian summer from November until February

by Charles  28/10/2016 2
Tags:city
Comments
We use cookies to ensure that we give you the best experience on our website. If you continue to use this site we will assume that you are happy with it.I acceptMore information