The province of Granada is located inland from the coast of southeastern part of Spain in the region of Andalusia. In the shadow of the Sierra Nevada mountain range and with a history spanning 2500 years, there obviously is a range of things to see in Granada Spain. So, whether you want to soak up some culture, see amazing architecture or just get away from the traditional beach holiday setup and see some beautiful scenery, Granada should definitely be on your list of places to visit in Spain.

Things to see in Granada

is a 1000-year-old Moorish complex comprised of the Nasrid royal palace (Palacios Nazaries), the Generalife gardens, the Medina government and courtrooms and the oldest part of the Alhambra, the Alcazaba fortress. With its sun baked red brick façade, and the commanding turrets of the citadel, it looks like a vision taken straight from an Arabian Nights fairytale. Resting on top of a hill on a wide plateau, the Alhambra boasts wonderful views of most of the city and the Sierra Nevada mountain range.

The number of visitors who can visit the Alhambra Palace is restricted each day so it is advisable to buy tickets in advance. Depending on which type of ticket you chose, you will be allocated time slots to visit certain areas in order to avoid overcrowding. You must adhere to the time slots allocated for visiting the Alhambra Palace and monument especially, as entry will be refused if you miss it. You can buy Alhambra tickets from any La Caixa Bank ATM, the Alhambra box office or online.
If you go up to the Alhambra early in the morning you will most likely also get a ticket for the same day, but might have to wait a few hours for your time slot.
How to get there: From the centre, there are regular buses, the 30 and 32, which go directly to the Alhambra. If you prefer, you can take a taxi, and if you are feeling particularly energetic, you can take a 30-minute walk from the Plaza Nueva.

The district of Albaicin was originally built under Muslim rule as a defensive town. There are a myriad of shops, restaurants and bakeries of Arab influence situated amongst the narrow, threadlike streets. Recommended sites are the San José Church and the Mosque of Granada.
How to get there: Visitors to the Albaicin can easily access this area by the Plaza Nueva on foot. There are direct buses, 31 and 32, to the Albaicin from the centre of the city. 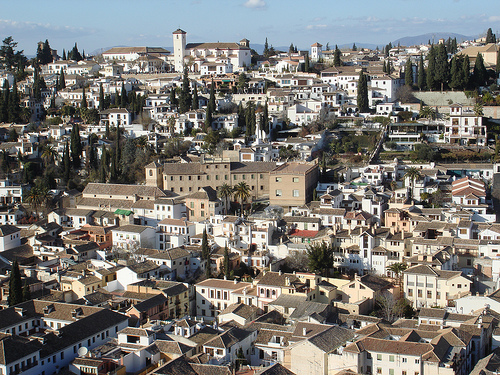 The Sacromonte district is to the east of Albaicin and is famed for its unusual cave habitats built into the side of the hill. Make sure to spend an evening in one of the caves where you can see a traditional Flamenco performance.
How to get there: A stroll can be taken up to Sacromonte from the centre, or bus routes 31 and 32 will take you part way and then a short walk will take you up to the Camino del Sacromonte.

The Sierra Nevada is 21km southeast of Granada city centre, but well worth a visit. You can enjoy beautiful landscapes and popular trekking routes. In the winter skiing and more is possible here.
How to get there: It takes approximately 30 to 40 minutes to drive up to the Sierra Nevada from the centre of Granada via motorway. You can also take the public bus service from the main Granada bus station. 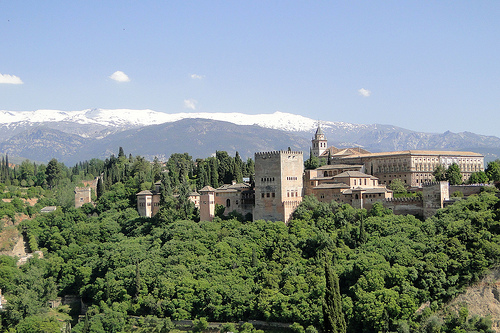 These Arab baths consist of 7 pools of varying temperatures, dressing rooms, showers and a massage and relaxation room. After a long day wandering through Granada’s beautiful sites this is the perfect spot to unwind, wash the dust off and luxuriate in the hands of the skilled attendants.
How to get there: Easily accessible on foot, this is situated in the centre of Granada and can be reached within a 15 to 20 minute walk.

It’s incredibly pleasurable strolling through Granada and soaking up the numerous cultural sites, so make sure to put this beautiful city on your must-see list! Take enough time to get lost and stroll around in the old city and make sure to have a tea with some Arab sweets.

Finding a place to stay is relatively easy and cheap, with Granada hostels providing an excellent backpacker option. Hostels in Andalusia are comparatively clean, well run and very cheap for Europe. Of course there are also plenty of hotels to cater for these, that want a little extra in their accommodation.

By Car: With easy access to the motorway, you can take the A-92 motorway from Málaga or from Seville. There are also good connections over Bailén to Madrid, which takes around 5 hours. And if you really want a road trip, Barcelona to Granada will take around 11 hours.
By Plane: The Federico García Lorca airport is situated in the town of Chauchina and is just over 9 miles (15km) from centre. There are direct flights from London City Airport, Newcastle and Southend. Domestic flights within Spain can be taken from most major airports, including Barcelona, Bilbao or Madrid. Another option is to fly into Málaga airport and take the airport transfer bus direct to Granada. There is also access to car rental at the airport as well as reasonably priced taxi services into the city.
By Train: Granada can easily be reached by train from many Spanish destinations.
By Bus: All parts of the Iberian Peninsula are covered by bus services to and from the central bus station in Granada. If you fly into Málaga airport you can either catch a direct bus from to Granada, or a slightly less direct, but still straightforward option requiring a transfer at Málaga bus station.

On average, Granada weather is quite mild. The hottest months are July and August, with temperatures reaching as high as 34C (93F). December to February see the coolest weather, averaging 13C (55F). The best time to visit Granada is in the spring, when the weather is sunny, pleasant and warm.

Which five tourist attractions in Spain are also worth a visit?

Become a facebook fan of Don’t worry Just travel and get article tips and other news in your facebook feed.

by Charles  23/06/2014 4
Tags:city, culture, Top 5, travelling alone
Comments
We use cookies to ensure that we give you the best experience on our website. If you continue to use this site we will assume that you are happy with it.I acceptMore information