In the area surrounding Bandung, there is a multitude of volcanoes and tectonically active landscapes. Here is a report about some of those Bandung volcanoes and other attractions, which are by far not the only things worth seeing in this area. My visit took place in August 2013.

features an impressive main crater, the Kawah Ratu, which is filled with grey mud. Even the typical sulphurous smell rises up to one’s nose here. 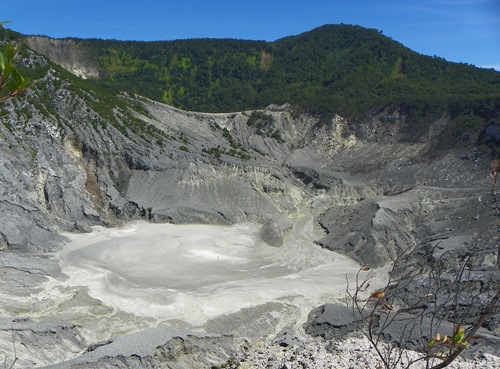 The main crater of the Tangkuban Prahu.

Along the main crater, towards the back, runs a path to the second crater, the Kawah Upas, a geyser landscape and a well with allegedly very healthy water. The path to the side crater and the geyser landscape was unfortunately blocked, but the park’s guard on location allowed me to walk accompanied a further 300 metres closer and take a picture from the distance, which I thought was very kind. 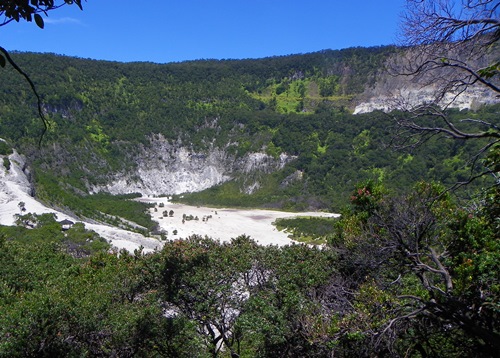 I used the healthy water, which could be found a further few hundred metres back, to splash my face, but I rather didn’t feel like drinking or showering in it. I left that to the locals.

How to get to the Tangkuban Prahu

Rent a private car with driver in Bandung, which you should get for 12 hours for approximately 45 USD. Then visit the volcano and other attractions.

presents itself completely differently. No crater is discernible. It is a mountainside, which appears to have been blown off during the last eruption and now presents itself to the visitor as a huge scree slope that emits a tremendous amount of hissing vapour. Since photos can render such things only poorly I have made two videos to capture the atmosphere.


Above and below the scree slope, however, gorgeous views present themselves. 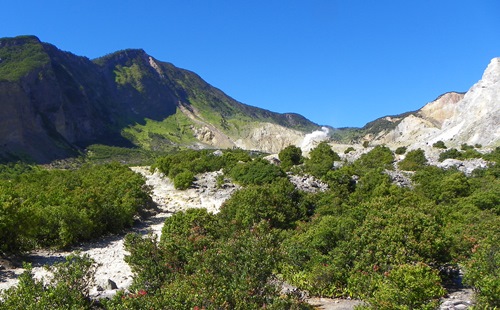 View to the mountaintop 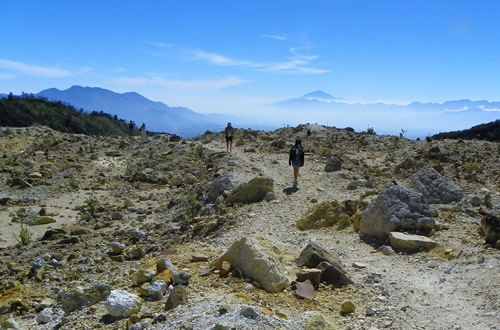 View back down to the valley

This is the only preserved Hindu temple in West Java. Built in the 8th century, it is located on an island and is visited by a lot of local tourists. If you are planning to visit temples in Yogyakarta or East Java, you can skip this visit, in my opinion. The drive from Garut takes about one hour. 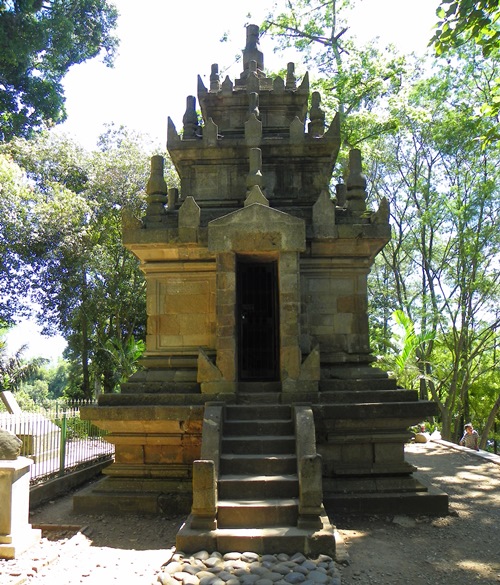 To round off an action-packed day you can treat yourself to a bath in one of Cipanas’ many thermal baths. In July and August one should book such a hotel in Cipanas early, since those fill up quickly. 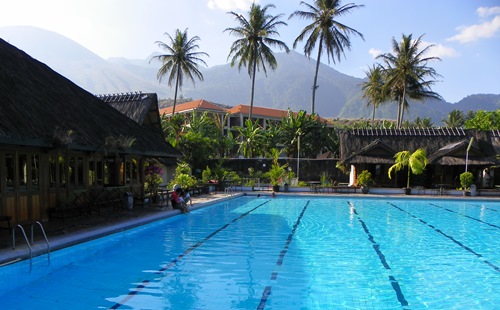 To get to these three attractions it’s best to rent a car with driver in Garut or Cipanas. I paid 40 USD plus petrol for 12 hours.

A remark about travelling here

I visited the Tangkuban Prahu at the beginning of my trip to Java. At this time I had every intention to travel locally, but that took, including changing twice and waiting at the layover stations, a total of two and a half hours each way. With a car and driver it would have only taken an hour and a half. In that case I could have also visited a thermal well nearby. Without my own car this was too risky for me, since I wasn’t sure whether I would be able to get back to Bandung. Public transport in Java ceases operation after sundown in my most places. One should rely on a car with a driver if one wants to see several things in a day.
But even then one has to factor in a lot of time driving, since with an average speed of 40km/h – anything faster is difficult in Java – everything takes a long time. If I had, for example, walked up to the top of Gunung Papandayan to see the field of Edelweiss, I couldn’t have also visited the Cangkuang temple.

Are you a temple fan?

by Charles  17/12/2013 0
Tags:java, temple, volcano
We use cookies to ensure that we give you the best experience on our website. If you continue to use this site we will assume that you are happy with it.I acceptMore information