Close to Yogyakarta lies the Gunung Merapi, an Indonesian volcano and one of the most dangerous volcanoes on earth. The last occasion on which it demonstrated its strength was in 2010 when it produced a series of eruptions with more than 300 casualties.
You can find more information about the Gunung Merapi here.If you visit the location three years later – my visit was at the end of August 2013 – the signs are still visible, but nature’s reclaiming of the territory is already quite advanced.
I visited the Gunung Merapi with the help of a car and driver and then went on foot for an hour from the parking lot in Kaliurang up in the direction of the crater: 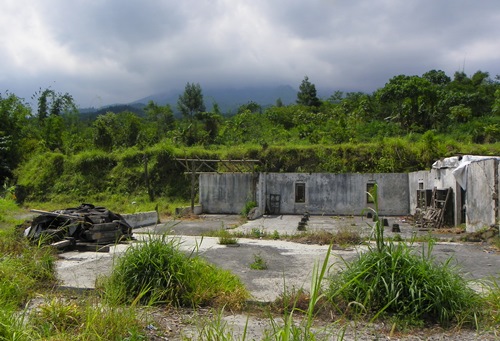 This picture shows it all: The disappointing view to the summit in the afternoon and a house, which was destroyed in 2010. 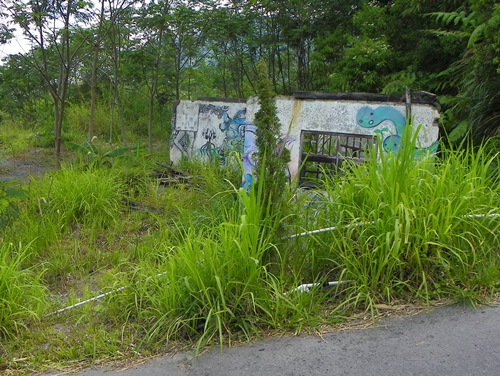 Here as well, one can only guess how this house may have looked once upon a time.

A cemetery, which is obviously still in use, since some graves are new or newly restored. 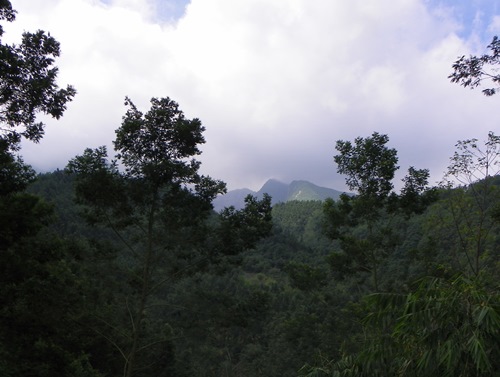 The best picture of the summit I managed to take. The incline is flat which is why the vegetation blocks the view most of the time.

A look down illustrates how much nature has recovered after just three years. Only a few tree stumps are reminders of the 2010 eruption.

As you can see from the images, the view was not particularly spectacular. The reason for that was that after a visit to Borobudur in the morning, I didn’t arrive in Kaliurang until the early afternoon. And if there is one rule that applies to all of Java, then it is the one that says there is only a good view of the volcanoes early in the mornings.
From the parking lot there is the option to take a tour with four-wheel drives. But no one there could explain to me what exactly I would get to see, how long it would take and whether I would have to wait until all seats in the vehicle were occupied. Instead they all showed me the same laminated sheet of paper with a few pictures. Thus, I gave this one, which would have cost me 20 USD and lasted perhaps half an hour, a miss.
You can also get chauffeured a little up the mountain on a motorcycle. The same distance takes half an hour on foot, which is why this sounded to me like a way to rip off tourists.

Can you even visit the crater of this Indonesian volcano if it is this dangerous? Yes, you can. But you have to be physically in good shape and carry good gear with you, such as warm clothes and a sleeping bag, since it can get very cold. As an independent traveller you can get to the summit without an organized tour. But you should hire a guide for the last part of the trail.
There are two options, which are described in detail in an article below. From the south you can go to Kaliurang and see the volcano from the distance. The path from there to the crater seems to have become too dangerous since 2010. Which is why one is better off starting one’s journey from the north, from Selo or New Selo.
If you don’t have all the gear, it would be advisable to book a tour in Yogyakarta, since chances are greater then that the tour company will organize parts of the necessary gear. I haven’t gone through the experience personally, but have found an interesting travel report here.


The easiest way to reach the Gunung Merapi is by renting a car with driver. If you use public transportation you run the risk of losing too much time, as my experience from Bandung shows. It is also possible to reach the Merapi with a rented motorcycle.

Read all about it in the Java travel tips.

Cancel reply
We use cookies to ensure that we give you the best experience on our website. If you continue to use this site we will assume that you are happy with it.I acceptMore information