If you want to go from Yangon to Bagan on an alternative, not so touristy route, Pyay is the logical stop in-between. You will be almost the only tourist here and hence get a lot of attention. If you ever wondered, how a superstar feels in the public, come here. Wherever I looked, people turned their eyes away or still looked at me with a smile.

So here comes the Burma off the beaten path experience.

The city offers wonderful views onto the Ayarwaddy river. On the southern side near the golden Aung San-statue there is a night market with some nice foods to try. I tried some Burmese sweets. Along the street are Burmese restaurants and the Grandma café, offering Korean and Western food. The café also has the nicest chairs to sit down, but they’re still cheap. 🙂 The night market street and others are dirty and muddy. A lot of grass grows along the edges of the street. So you can definitely say, that Pyay has seen better times. 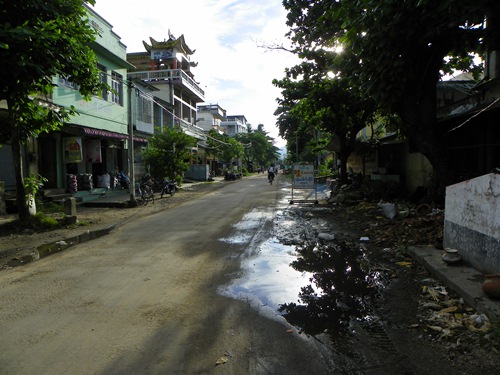 It is nice to walk around here and you’ll have a good view to Pyay. The Paya stores hair and tooth-relicts from Buddha and is an important Paya in Burma, that gets a lot of visits from outside Pyay. 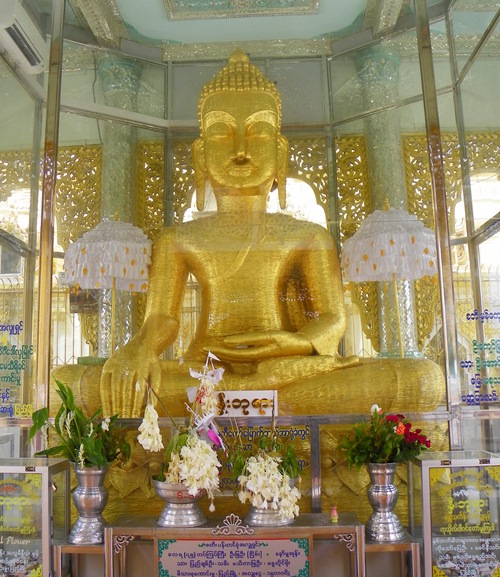 This is one of the oldest archaeological sites of Burma. And I had it to myself, when I was there. It was the capital of the Pyu empire, that existed from the 4th to the 9th century. On site stands the Bawbawgyi Paya, which is the oldest stupa of Burma built in the 5th century. You can see the remains of the royal palace outside wall and more remains of stupas and temples. You should rent an ox-cart and circle the site in about two hours. Find more information here.

Remains of the palace wall 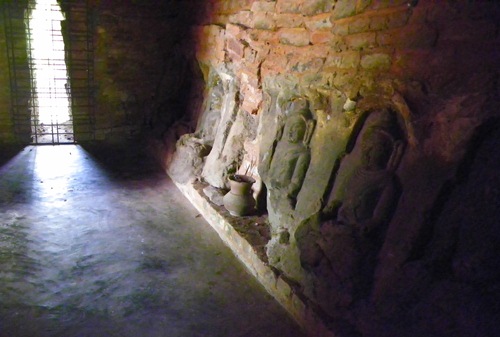 An inside look at the Buddhas of Rahanta cave Paya. The Buddhas are looking towards the old city of Tharaykhittaya. 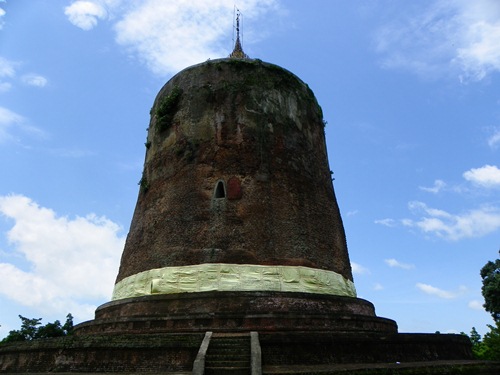 Bawbawgyi Paya, the oldest stupa of Burma from the 5th century! It was built by king Duttabaung and has Buddha relicts enshrined.

Myat Lodging House, 222 Bazaar street, Pyay, phone 053 5695
The rooms are ok, but nothing special. I paid 20 dollars for a room with an own bathroom. The owner has a tendency to try to cheat you, but apart from that is a nice guy. He took me to the major sites in and around Pyay for 10’000 Kyat with his motorbike. He also offers a bicycle for rent.


You can reach it by bus or train from Yangon. If you like it slow you can also reach it by boat on the Ayarwaddy river. You can buy a bus-ticket in Yangon at the Aung San stadium one day before. There are no English signs. Just ask several times for Pyay air-con bus of the Maw company until you found the booth. The Aung Mingalar Highway bus station is far up north close to the airport. Show your bus ticket to the taxi driver the next day and he will know where to go.