Lyon, France’s third largest city, is an architectural jewel filled with history. Capital of Gaul in the Roman Empire, important area for silk production in the 19th century, the city now is a UNESCO World Heritage site boasting with activities and attractions. From Fourvière to Bellecour you will never run out of things to do in Lyon.

Conveniently located two hours away from Paris and Geneva, Lyon is a perfect location to include in weekend trips. This article highlights the best Lyon France attractions and suggests you to make this one of your more enjoyable city breaks. In a word: Lyon will be the place for your next great European holidays.

Notre Dame de Fourvière is the basilica dominating the city, sitting high on top of the hill bearing the same name. Since the early years of Christianity, the hill has always been a place to celebrate and pray Virgin Mary. The basilica in its current form was built from 1872 to 1896 to thank the Madonna for saving Lyon from the war with Prussia. Today, you can visit the neo Byzantine styled basilica and its crypt, sheltering the treasure. You will also admire breathtaking views of the city and the Alps, reaching up to the Mont Blanc on clear days.

Take the metro line D to “Vieux Lyon” and then hop on the funicular to “Saint Just”. From the Vieux Lyon station, you can also climb the hill by foot through the montée St Barthélémy and the Rosaire garden. 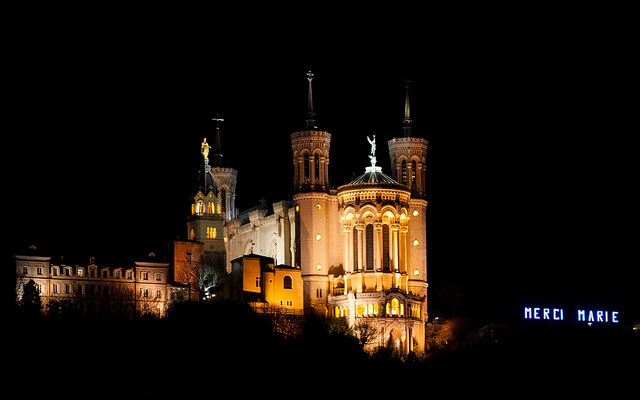 The Croix-Rousse neighbourhood is located on the hill facing Fourvière. As opposed to the praying Fourvière hill, Croix-Rousse is the working hill, as it used to be the weavers’ headquarters. You can see the remains of the workshops in almost all the buildings, with ceilings standing high to welcome the looms inside. Croix-Rousse is a place where you will like to stroll. May it be on the plateau or the slopes, there is a village-like feeling about this place. Make sure to see the Maison Brunet on Rivet street and the “Gros Caillou”, a stone that is believed to have been transported there from the Alps by glaciers.

Take the metro line C to “Croix-Rousse” to reach the plateau or stop at “Croix-Paquet” for the slopes.

At the foot of the Fourvière hill lies Old Lyon. Walking around this neighbourhood is surely one of the best things to do in Lyon. Charming Renaissance buildings are lining the Rue Saint Jean, the main street, circumscribed by the Saint Jean Cathedral and the old Saint Paul Station. There, you will enjoy some of the best restaurants in Lyon France, the traditional ones being called the “bouchons”. Don’t miss out on the “traboules”, passageways in between buildings formerly used to transport products.

Architecture fans will certainly love this newly constructed, modern area of Lyon. The neighbourhood got its name from its location at the meeting point of the rivers Rhône and Saone. The museum of natural history is also to be found here. An interesting restaurant there is the Domo, where the chef blissfully blends French and Japanese cuisine. Sit on the terrace on the bank of the Saone and enjoy the view!

Spreading over 290 acres, the park is the green heart of the city. It is ideal to relax on a hot day or for a day out with the kids, as there is a free zoo. You can also rent a row boat on the central lake or just take a walk among the trees and flowers. On Wednesdays, be sure to take the children to a Guignol show, the local puppet star.

One of the highlights of what to do in Lyon France, the Bellecour square, located right in the centre of Lyon, is the largest pedestrian square in Europe. Its unique red soil hosts a Ferris wheel and an ice rink in winter. The main shopping streets of Lyon are also accessible from the square (rue de la République, rue Edouard Herriot).

Take the metro line A or D to “Bellecour”. You will come out right on the square! 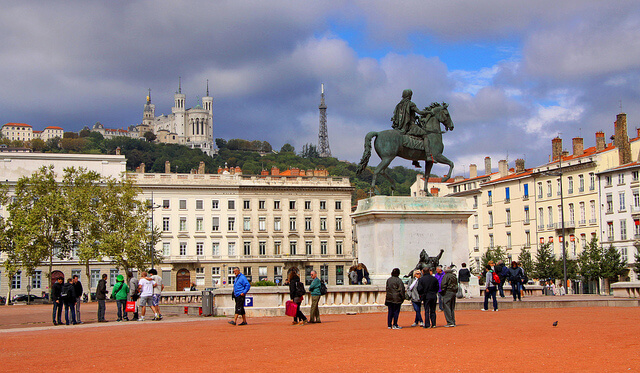 in the heart of the city, the place des Terreaux is one among the best of what to do in Lyon France. Admire the monumental fountain designed by Bartholdi (who also created the Statue of Liberty), the Palace Saint Pierre and the city hall sitting on both ends of the square, and play in the mini fountains on a hot day. Many good restaurants are also to be found around (try Léon de Lyon).

Take the metro line A or C to “Hôtel de ville – Louis Pradel”.

The paintings of Lyon

Along with its beautiful basilica, the Fourvière hill is also home to a very well preserved authentic Roman theatre, taking us back to the time when Lyon was capital of Gaul. The Grand Theatre, located right where Lugdunum was founded in 43 B.C., is the oldest in France. It stands here along with the Odeon, a smaller theatre that was used by political and philosophical orators. Make sure to come in the summer, when the festival “Les Nuits de Fourvière” is organized in the antique theatres.

Take the metro line D to “Vieux Lyon” and then hop on the funicular to “Minimes”.

Every year around December 8th, Lyon sparkles and shines. The now very popular festival of lights was first organized in 1643, as the inhabitants of the city displayed candles on their window frames to thank Mary for sparing them from the plague epidemic. A must-see!

How to get to Lyon in France

Lyon is easily accessible by high-speed train from all around France, with its two central stations Part-Dieu and Perrache. The airport Lyon-Saint-Exupéry offers international flights and is conveniently connect to the centre. Finally, by car, take the A6 from Paris, the A7 from Marseille, the A42 from Geneva, the A43 from Grenoble, the A47 from Saint-Etienne and the A89 from Clermont-Ferrand.

In Lyon, each season has its perks and charms. Come for the festival of lights in the winter, of for long walks outside in the spring and autumn. Just keep in mind that the city can get very hot in the summer, and that the temperature often reaches 40°C.

Do you want to see one more perfectly preserved Roman theatre in the south of France?