The Languedoc area is located in the south-west of France and designates a former province spreading between the Rhone river on the east and the Garonne river on the west, now split between the two regions of Midi-Pyrénées and Languedoc-Roussillon. It gets its name from the language spoken there, the “Oc” language (translated by the word “langue” in French). Though this language has mostly disappeared, some local communities still communicate using it. Today, it is one of the most enjoyable south of France destinations and home to some of the most beautiful cities in the south of France. It will strike you by its beauty, its wonderful and diverse landscapes, as well as its long history that can easily be approached by all.

So what to do in the Languedoc area? Indeed, from Roman artefacts (such as the Pont du Gard, the Nîmes arena, or the Orange theatre), to Middle Ages remains (such as the old fortified city of Carcassonne), to constructions of the 18th century (such as the Canal du Midi), you will be able to find a lot of Languedoc places to visit. All tastes in nature will also be served, as Languedoc has a coast bordering the Mediterranean sea, lowlands and marshes (in the Camargue area near Montpellier), and small mountains around Avignon, such as the Mont Ventoux, well-known by cyclists and fans of the Tour de France. So what are the best things to do in Languedoc Roussillon? How to choose in such a variety of south of France cities and monuments? Here are some tips to help you decide whether you’re travelling solo or as a group.

Places to visit in Orange

Orange is a city located north of Avignon, in the Rhone valley. It is home to two exceptional Roman monuments that are well worth your visit: the triumphal arch and the antic theatre. Both are UNESCO World Heritage sites.

The antic theatre is the best maintained in Europe. It dates back from the 1st century BC and the reign of Augustus, and is among the first stone theatres built in the Narbonnaise area of the Roman Empire. After having been used for several centuries, the theatre is closed in the 4th century AD with the arrival of Christianity but, fortunately, is not destroyed. It is finally restored and re-open in the 19th century thanks to the intervention of the French poet Prosper Mérimée, and still stages various shows today.

Despite its name, the triumphal arch does not celebrate a specific triumph, as this could only be done in Rome. It is instead a commemorative urban arch erected in honour of the founders of Orange, marking the entrance to the town. It is located in the northern part of the city, around 70 meters away from the ramparts.

How to get to Orange for your travel planning

Orange can easily be reached by the highway (exit number 21 (Orange-centre) on the A7), by train (gare d’Orange), or by air through the airports of Marseille and Nîmes.

Best known for its theatre festival taking place in the summer, Avignon is also a remarkable vestige of the Middle Ages, as it was then the capital of Christianity. This long history will leave you with plenty of things to do in Avignon. Three of the most important Avignon places to visit are its bridge Saint Bénézet, the Palais des papes and the old city wall. Without waiting, here is a sample of what to do in Avignon.

The “Avignon bridge”, or as is it officially know the Saint Bénézet bridge, used to be a crossing on the Rhone river. The bridge owes its celebrity to the song for kids bearing its name. After the construction of a chapel dedicated to Saint Bénézet on the Rhone, the building of the bridge started in the 13th century and took many decades. Even though only 4 arches remain today, it used to be 900 meters long, with 22 arches in total. It collapsed during the 17th century and remained like that until today, as nobody would pay to fix it. 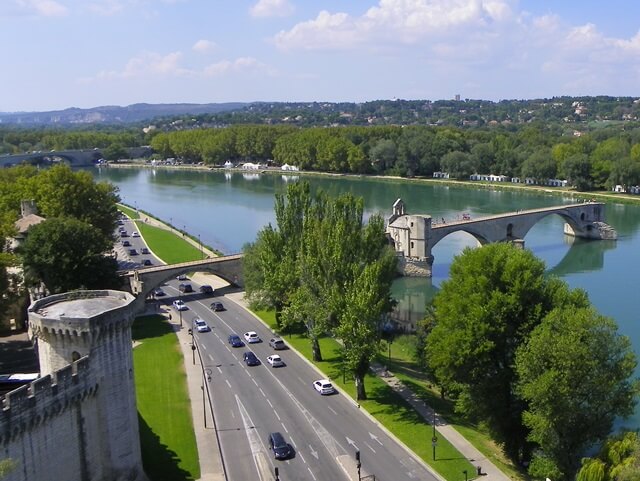 On the left bank of the river, close to the bridge, is another of the places to visit in Avignon, the Palais des papes. This building is most certainly one of the best things to do in Avignon. During the 14th century, the city became the capital of Christianity as the popes left Rome. They thus built the palace on a rock, marrying perfectly nature and architecture, and gave birth to the most important Gothic palace in the Western world.

The city wall, dating from the 14th century, still engirds the old town. You can walk on it from the entrance next to the Avignon bridge and get an amazing view on the city. With all those great monuments and places to see in Avignon, you should now be well inspired about what to do in Avignon!

How to get to Avignon for your travel planning

Avignon can be reached by highway (exit number 23 or 24 on the A7), by train (gare d’Avignon centre and Avignon TGV), or by air through the airports of Marseille and Nîmes.

The Pont du Gard – the next of the Languedoc things to do in your south of France vacation – is located near the city of Remoulins and is part of a Roman aqueduct which remains are still well visible today. Actually, it is one of the most well preserved Roman constructions in the world. Built in the 1st century AD, the main purpose of the aqueduct, which was 50 kilometres long, was to provide the city of Nîmes with water. More than 1 000 men worked on the construction and finished it in only five years, a real feat at this time. The stone-pit that was used is located around 600 meters away from the bridge, but is not accessible to the general public. A model is however available at the museum, just next to the Pont du Gard. The bridge in itself is 49 meters high, and is as such the highest antic aqueduct in the world. It is made up of three storeys of arches: 6 on the first level, 11 on the second level and 47 on the third level. Unfortunately, only a fraction remains today. The Pont du Gard has been a UNESCO World Heritage site for 30 years.

Place to visit in Nîmes in France

The next place to visit in the Languedoc area is Nîmes, another wonderful example of well preserved Roman monuments in the south of the country. Its two most famous features are the Nîmes amphitheatre and the Maison Carrée.

The Nîmes amphitheatre is the best preserved in the whole area that used to be the Roman Empire. It was built during the 1st century AD and was used to stage wild beast hunts and gladiators fights, with a crowd of 23 000 watching. The arena is still in use today. 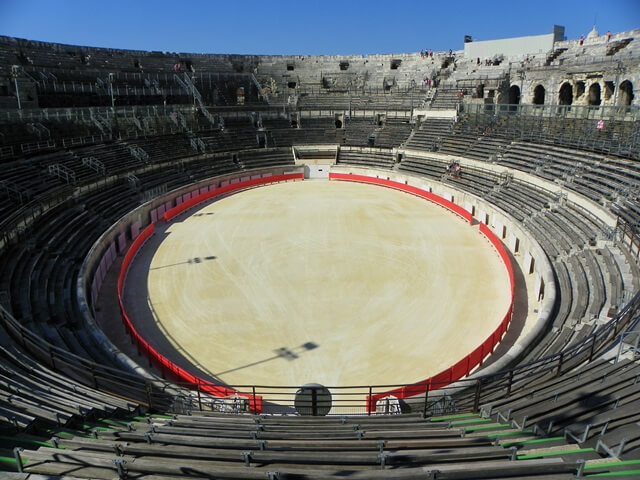 Another Nimes place to visit, the Maison Carrée, was also built in the 1st century AD in honour of Augustus’ two adoptive sons, Caius Caesar and Lucius Caesar. It is the only Roman temple entirely preserved, thanks to its uninterrupted use since the 11th century. Nowadays they use it as a cultural and historical film theatre, which I find an improper use for such an old, important building.

How to get to Nimes for your travel planning

You can reach Nîmes by car (exit number 24 (Nîmes-est) on the A9 or number 1 (Nîmes-centre) on the A54), by train or by air through the Nîmes airport.

The canal du midi, a UNESCO World Heritage site and one of the best things to do in the Languedoc region, is a canal linking the Mediterranean Sea to the Garonne River between Sete and Toulouse, and thus to the Atlantic Ocean. It was dug in the 17th century and was then considered as the biggest construction of its time. Its building was motivated by the trade of wheat, and it is today one of the oldest canals still in service in Europe.

It is now mostly used for tourism purposes and will bring you delight during your holiday in the Languedoc region. The best way to look at this man-made wonder is of course to hop on a boat and cruise along the canal, but you can also decide to cycle along the way, or even to walk. No doubt the Canal du Midi will be a highlight of your trip!

You can reach the canal anywhere between Sete and Toulouse, following the A61 highway, by train stopping at one of the cities in between (Sete, Beziers, Narbonne, Carcassonne, Castelnaudary) or by air through the Toulouse airport.

A great Langueodc Roussillon thing to do, is to visit the medieval walled city of Carcassonne, that was built in the 13th century and is a great monument from the French Middle Ages. It is indeed still unbroken and you will be able to admire the beauty of its wall and ancient houses. It is now a UNESCO World Heritage site, thanks notably to the history of the Cathare civilisation and the crusades it displays.

How to get there to Carcassonne your travel planning

You can reach Carcassonne by car (exit number 24 (Carcassonne-est) on the A61, by train or by air through the Toulouse airport.

If these are the highlights of the Languedoc area in the south of France, a lot of other places are also worth a detour. Many cathedrals from different eras are there to see and cities like Montpellier and Narbonne on the seaside or Béziers are very pleasant to visit.

How to get to the Languedoc region for your travel planning

The Languedoc region is easily accessible via air through the airports of Marseille, Nîmes, Montpellier or Toulouse, via train high speed and local train (all the main cities have stations), or via road through the highways A7, A9 and A61.

When is the best travel time to visit Langued0c Rousssillon in France?

The best time to go to the Languedoc area if you want to avoid crowds but still enjoy warm and sunny weather are the months of May and June or September to beginning of October. The summer could nevertheless still be your first choice if your priority is to embrace the cultural festival season with the Choregies d’Orange, the Avignon theatre festival, or the music festival in the Nîmes amphitheatre.

by Charles  21/10/2016 4
Tags:city, culture, travel itinerary
Comments
We use cookies to ensure that we give you the best experience on our website. If you continue to use this site we will assume that you are happy with it.I acceptMore information