El Nido, in the north of the Palawan island in the Philippines, is paradise! Full of beautiful nature and gorgeous beaches. Seriously! Or at least not far off. When I arrived and saw the view of the ocean bay for the first time it almost took my breath away – it was that beautiful. Come here, if you look for the best tropical vacations, you could possibly imagine, and also for inexpensive vacations, as soon as you’re on the Palawan island. 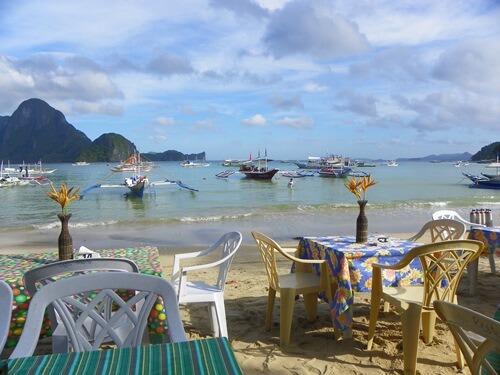 Things to know about El Nido in the Philippines

Let’s start with general information: El Nido has no electricity from 6.00 until 15.00. Consequently it is quiet there during the daytime. Most restaurants of higher standard are to be found along the El Nido main beach front and feature seating either directly on the beach or on the terraces behind it. No problems to get your own table if travelling solo. The other parts of town also feature an appropriate selection of international and local restaurants. A restaurant by the name Cantina seems especially popular for a taste of Filipino specialities.

There are also some really good hotels in El Nido in beautiful Palawan: Along the beach some nice boutique hotels have opened up in the past few years. Some of them also have public bars and restaurants in them, so you can experience some of the decent, not so rushy El Nido nightlife. The ones who like it very quiet can stay in a resort or hotel a bit outside of El Nido.

At the bottom of this article I have collected El Nido accommodation recommendations.
Or check out prices and deals of the El Nido hotels right here.

Things to do in El Nido

The focus on what to do in El Nido clearly lies on the day tours. If you can, make a special tour like the stand up paddle board tour. It will be more interesting and less crowded than the standard El Nido tours.

In my hostel, near the entrance, I noticed the poster for this tour. It was a little more expensive than the rest of the offers at a price of 2,200 PHP (about 50 USD). The environmental surcharge, see below, still has to be paid separately.

Remark: In June 2015 I checked their facebook site and it is inactive since May 2014. I’m not sure, whether this tour is still on offer.

My report of the stand up paddle board tour

Robbin, the tour guide, is a funny Canadian, who lives in El Nido and has only been offering this small group tour for a short while. I talked to him throughout the day and found him very entertaining and interesting.

At the tour’s first stop the paddle boards were not in use yet, since, according to Robbin, we would not have had enough time at the following stops. They were two islands, which were connected via a shared “double” beach or rather a sandbank. It looks amazing. The smaller island features a viewing platform with a – you guessed it – gorgeous view. 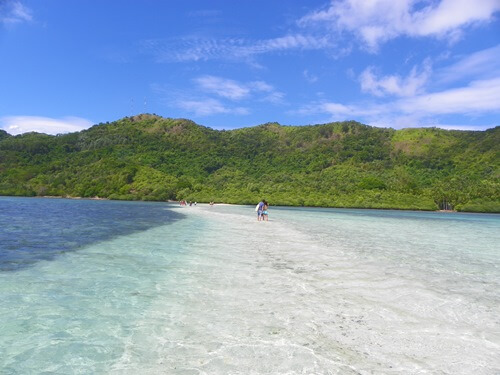 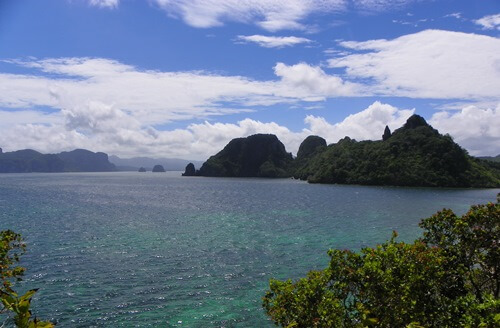 The small lagoon, to me, was the best spot on the entire tour. I could have stayed in this place all day. To reach the lagoon you have to paddle or swim through a small opening. The further I entered into the lagoon the more I relaxed and I enjoyed the lagoon’s atmosphere wholeheartedly. In a small side lagoon (see the shaky video below) the ceaseless winds produced noises that would give the faint-hearted cause to think of ghosts. 🙂   We were served an opulent lunch of freshly caught and barbecued fish alongside other delicious things on the beach just outside the lagoon. 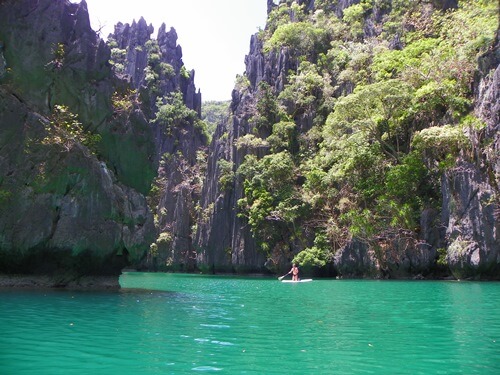 The big lagoon near El Nido was, as the name reveals, bigger. Its entire length from the entrance to the end was certainly about 500 metres. I felt sorry for the tourists who had booked the tours A to D, because you can only walk at the entrance of the lagoon. Afterwards the tour boat goes all the way to the back and then returns to the entrance immediately. We, on the other hand, could paddle around the entire lagoon to our heart’s content and stayed for about an hour. 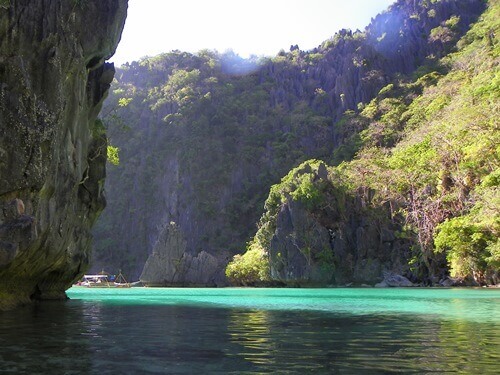 This lagoon is half open and not so interesting for paddling into. But its rock formations present opportunities for nice pictures. 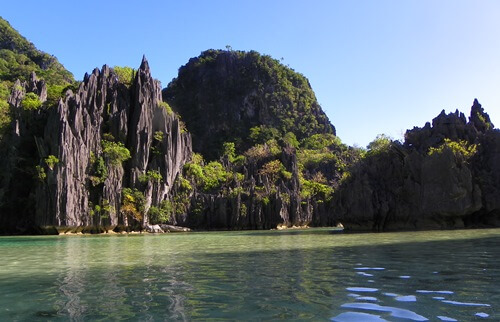 The light of the slightly descending afternoon sun gave the beach a special aura. Along the entire length of the beach there were stalls constructed during my visit in March 2014. Therefore one can expect more of a hubbub in the future. 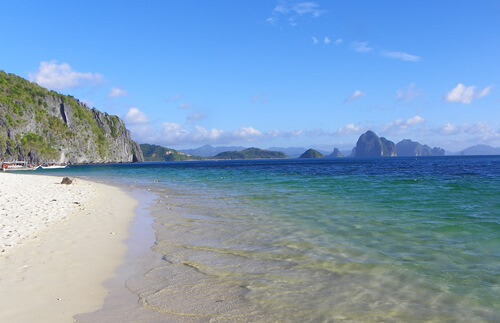 Beware of the sun

I used SPF 20 and applied it four times during the day. This is not sufficient for someone who is not in the sun a lot. Use factor 50, protective clothing or follow my example and suffer the worst sunburn of your life. And please, don’t forget to cover you head! (Luckily, I had thought of that.)

Well, I’m not into diving, but if you are, it might be worth considering the “Amazing El Nido Ecotourism Dive Safari” tour. You will do three dives in dive sites in the El Nido area. I heard from divers in El Nido, that it can be quite amazing. An instructor, the equipment and food except breakfast is included. Check prices and availabilities here.

There appears to be some kind of cooperative in El Nido Philippines. Everyone seems to have reached a consensus to offer the same bundle of tours. There are four tours, which are called A to D. Most often there are 6 to 10 persons per tour, who are shipped around the five attractions per tour on a catamaran. Everyone who goes on a tour has to pay the environmental surcharge of 200 PHP, which is valid for 10 days. With most tours it’s included in the price of the ticket. If it isn’t, it can be purchased right by the beach. This, or a similar tour, really make your tropical holidays a perfect experience.

If you’re after a decent El Nido nightclub, you’ve come to the wrong place. 🙂 There are two bars at the beachfront, that get going from about 9pm, but certainly nothing like a nightclub to be found here. If you’re out for a drink you can either go to one of the restaurants right at the beach – those are situated in the centre of the beach and a bit more low key with plastic chairs and simple wooden tables – or you go to the left end of the beach, seen from the city centre, towards the El Nido ferry terminal and sip a cocktail at one of the newer boutique hotels there. There’s something for every taste. I tried both and loved both. El Nido is really an enjoyable place.

Where to stay in El Nido – El Nido hotel recommendations

The Cadlao resort El Nido is a bit out of El Nido, but it gets good ratings from its guests. They say things like fantastic, splendid, etc. I’d say you need to have a look at the rates of the Cadlao Resort El Nido.

If you don’t need to be at the beach directly and prefer to have a jungle feeling, then check out the rates of El Nido Viewdeck Cottages. They don’t have top reviews by their customers, but most gave them a good rating. They are more like serviced bungalows than an actual hotel, but their view is nice according to the ratings.

Check out prices and rates of The El Nido garden beach resort here. The resort lies at the far right end of El Nido beach seen from the city centre. Guests, who stayed there, say, that the location and pool are really nice, while the rooms could be better.

The Ipil Suites El Nido are located at the Calle Real, the second road behind the beach. From there you’re at the beach in no time. The suites mostly get good reviews. Some guests mention, that the installations could be better. Make up your own mind on the reviews and rates of the Ipil suites El Nido.

As a good example of a simple hotel in town we recommend to stay at the Bill Tourist Inn. It lies in the city centre, a few minute walk away from the beach. It is a solid hotel and most guests staying there were satisfied with their choice.

Personally, I stayed at a hostel, that was also in the centre of El Nido city, right around the corner from the well known El Nido art café, that you – by the way – should visit to admire its lovely decoration and furniture, but I’d rather not review that hostel. It fulfilled its purpose, but was nothing too special, just cheap. 🙂

From Puerto Princesa to El Nido

If you aren’t rich the outbound journey takes a long time. You’ll sit in a bus or minivan from Puerto Princesa for five hours. Any hotel or hostel in Puerto Princesa can organise the pickup with a minivan from your hotel. If you’re taller than 1.75 meters, respectively 5 feet 7 inches, you might prefer going by bus, so that your knees won’t be stuck all the time. But then you will need a trike bringing you to and taking you from the bus terminal. The journey by bus will be about an hour longer than by minivan.      This information is of course also valid in reverse direction from El Nido to Puerto Princesa.

If you’re lucky to be wealthy enough the El Nido airport – yes, there is one – belongs to a private company, which runs a few luxury El Nido resorts on some smaller Palawan islands and flies in their deep-pocketed clientèle directly from Manila.      Otherwise you have two options regarding flights from Manila to El Nido Fly to the Coron island airport north of the Palawan main island and then take a ferry to El Nido or fly to Puerto Princesa and then take the minivan or bus to El Nido (see above).

When is the best travel time for Palawan and El Nido?

Palawan, one of the most stunning islands of the Philippines is, with the exception of the most northern part with the island Coron, not within reach of the tropical storms and there are no earthquakes. The best El Nido weather can be encountered from January to May when it rains rarely. During the rainy season, the roads, particularly in the southern part of Palawan, can be impassable.

This article contains affiliate links. If you buy a product or service Dont worry Just travel will get a commission. I offer all my content to you for free. This is how I earn some money. I hope that is ok.