Do you enjoy island hopping, snorkelling and the relaxed style of living aboard a ship? Are you ready for that next level, for sailing in Thailand? Then perhaps a sailing yacht tour would be the right thing for you. But what is it like to sail around Thailand’s islands? I would like to present you with a sailing trip on the sailboat Thida, which is stationed in Pattaya, but can travel around the entire Gulf of Thailand.

I was supposed to meet the boat’s skipper, Ralf, at nine in the morning. Our meeting place was the Ocean Marina Yacht Club. At the beginning of the sailing trip there was no wind, so Ralf started the engine and soon we were gliding across the calm water surface in the direction of the islands just off the coast of Pattaya. Since there was not all that much to do on deck, I took a look around the cabin.

Life inside the Thida sailing yacht

In the Thida’s bow and stern there is, on either side, a cabin with a double bed and some room to stand and get changed. For someone who is 2 metres tall it may be a little tight, but overall it is fairly comfortable. Along the right boat wall there is a kitchen, including a fridge and storage space. I quite liked the cooker, which has been installed with a flexible hinge. Thus one can even prepare food when the boat is tilting sideways. 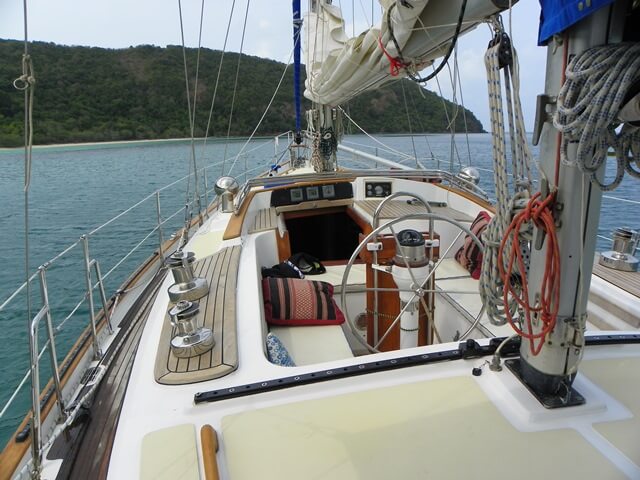 Once we’d arrived at the group of islands, we dropped anchor just off a small island, which is a nature preserve and cannot be walked upon. But the place is ideal for snorkelling, and discovering the diverse wildlife, which exists just off the island, which makes up for it.

Just before lunch, the wind started blowing. Finally, Ralf could set the sail and sail to the next group of islands. On the way there he served lunch: a green Thai curry. For dessert we had a fruit platter.

A little while later, we dropped anchor just off a different island, where we got another chance to snorkel and swim. During this we also got to observe just about 150 Russians, who apparently get dropped here by a large tour boat every day to party on this island beach with loud music. Each their own! Yet the Thailand sailing trip on the Thida has way more style, and when there aren’t any large boats nearby, the only thing you’ll hear is the whoosh of the water along the boat wall and the rattle of the sail. 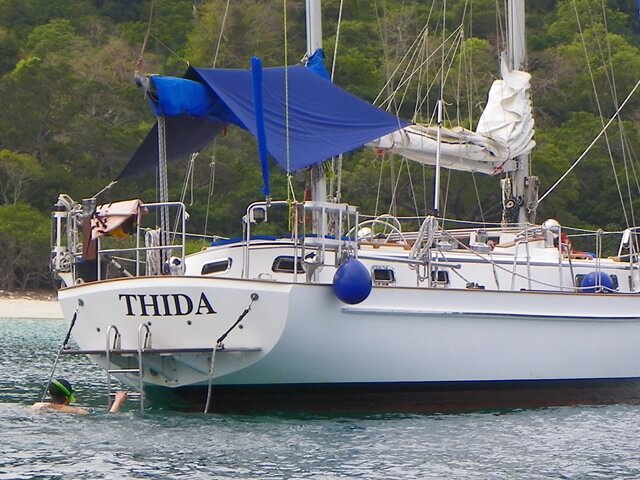 Sailing in Thailand – the rougher variety

When all tour participants, two Koreans and I, had swum enough and snorkelled enough, we made our way back to Pattaya. The weather close to the coast is generally known to be capricious, regardless of where in the world you are. We saw a weather front that carried rain approach us. The wind got stronger and the daylight assumed this particular aura that it only gets just before a storm. To prepare himself for the return sailing trip, the skipper Ralf manoeuvred the boat into a special position, allowing the wind to push into the sails at full force, pushing the yacht sideways, but not moving it too much otherwise. As a sailing philistine, I didn’t know that this was possible and was duly impressed. Ralf explained that during strong winds on the open sea, one can move the boat into such a position to get a few hours sleep without being shaken through the whole time. 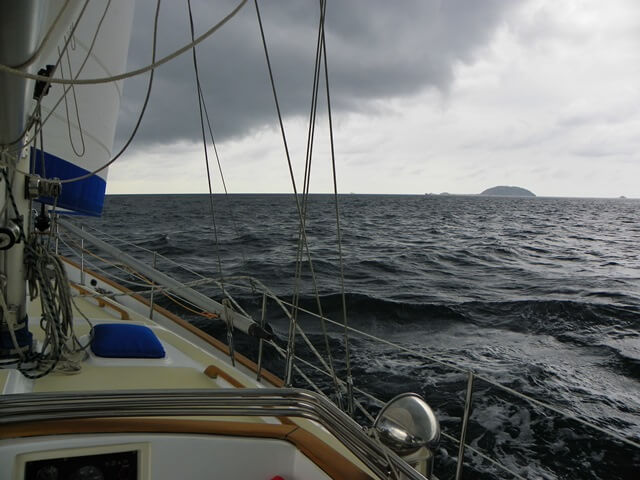 Shortly after, we started on our return journey and soon it began to rain at full force, which led us, the three guests, to retire to the cabin, leaving the skipper Ralf alone – exposed to the forces of nature – on deck. Shortly before our arrival at Ocean Marina Yacht Club, the weather improved again and as early as the walk down the jetty, the sun started burning down on my neck again.

My verdict on sailing in Thailand

The sailing trip aboard the yacht Thida was my first. I enjoyed being able to move across water without having to hear the constant noise of engines. The atmosphere on board was lively and relaxed, and I learned quite a bit about sailing from the skipper Ralf. The islands visited for snorkelling and swimming in Pattaya were fine, but I can imagine that a sailing trip around the Gulf of Thailand with island hopping around Ko Chang or Ko Samui has even more to offer.

Sailing in the Gulf of Thailand

A one-day Thailand sailing tour from Pattaya is a great test trip, if you want to find out whether such a sailing trip could be your thing. On the Thida you can, if you want, take a trip round the Gulf of Thailand for several days, and discover mysterious coves, drop anchor at less populated beaches, or just float around the warm water in the sunshine.

From Pattaya, a sailing trip to the islands of Ko Chang and Ko Kood near the Cambodian border is an example of a trip that naturally suggests itself. More information about sailing in the Gulf of Thailand and possible destinations for your Thailand sailing trip with the Thida sailboat can be found here. The prices for a multi-day trip – or as an exclusive sailing yacht charter – can be found here.

The Thida also sails every now and again to the Thai islands of Ko Samui, Ko Phangan and Ko Tao, depending entirely on the customers’ wishes.

She is 13.7 metres long and was built in 1986. Getting on a bit, she was restored completely in 2012, and fitted with a deck and cabin made in part from teak wood. Below deck, the Thida features a cosy inner cabin, two sleeping cabins and a kitchen. More information can be found here. Aboard the Thida English is spoken as well as German. 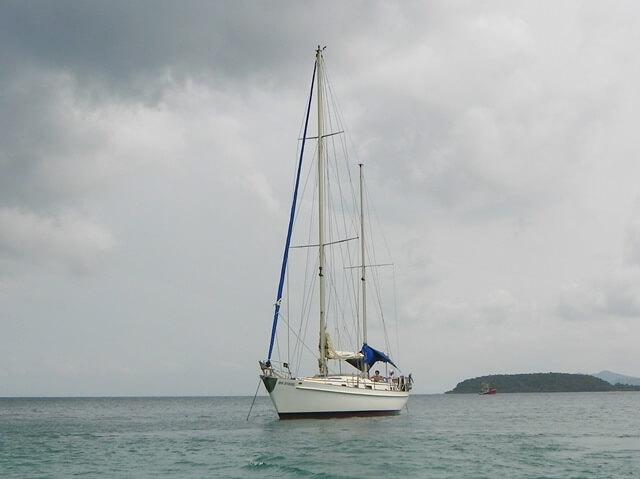 For Ko Samui and surroundings, conditions are best between June and September.

The best time for sailing around Ko Chang is from November to April.

More information can be found here by clicking on the region you are interested in.

This article benefited from the support of Thida Yachting.

by Charles  31/03/2015 4
Tags:beach, island, luxury, relaxation
Comments
We use cookies to ensure that we give you the best experience on our website. If you continue to use this site we will assume that you are happy with it.I acceptMore information