The Romanian capital Bucharest is fun and sizzling. Bucharest is at the crossroads of Romania’s Latin ancestry and Eastern Europe’s Balkanic vibe. Bucharest is fast, temperamental and loud. And then, just when you thought you finally understand, what this city is about, you randomly walk into a quiet, sunny street where time stopped in 1932, when everybody spoke French, because that was the elegant thing to do back then.

What you see is not what you get in Bucharest. At the first glance, the mix-and-match of concrete block flats (a remnant of the Communist regime) and gorgeous older architecture of the interbellum is a bit confusing. Once you realize that this cocktail contributes to Bucharest’s charm you take it as it is and start strolling down typical streets such as Constantin Coandă or Vasile Alecsandri. If you’ve enjoyed this walk, you’ll love sipping a tea at “La Metoc”, a romantic tea garden well hidden under heaps of wild vegetation and fig trees. 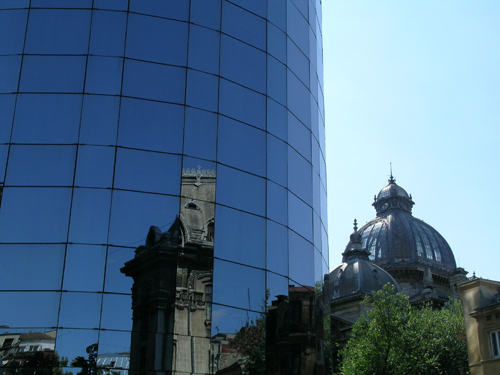 Buildings mirrored by a modern office building on Victoriei Boulevard, one of Bucharest’s most iconic avenues.

Bucharest is home to the world’s second largest administrative building, after the Pentagon: the Houses of the Parliament. The same building also hosts the National Museum of Contemporary Art! Make sure you drop by to feel the pulse of Romania’s art scene.
Interested in something that speaks more of the Romanian soul? Visit the Romanian Peasant’s Museum.
Fairly close to this latter one, you can also find the “Grigore Antipa” Museum of Natural History, particularly exciting if you’re travelling with children.

The Romanian cuisine is hearty: lots of meat and lots of taste. If you’re curious about more traditional dishes, try “La plăcinte” (“The Pie Place” – it serves more than just pies) or “Lacrimi şi sfinţi” (which – believe it or not – translates as “Tears and Saints”). For a lighter treat, try a brunch at Simbio. Are you into even lighter dishes? You can try some raw vegan at BioFresh.

The epicentre of fun is the old Lipscani region, a net of pedestrian streets lined with French eclectic style buildings which host scores of bars and pubs of all colours and sizes. Have a good pint or two of local beer, such as Silva, Ursus, Ciuc, the unfiltered Nenea Iancu or, for those who crave a stronger ale, try Stejar (which translates as Oak). 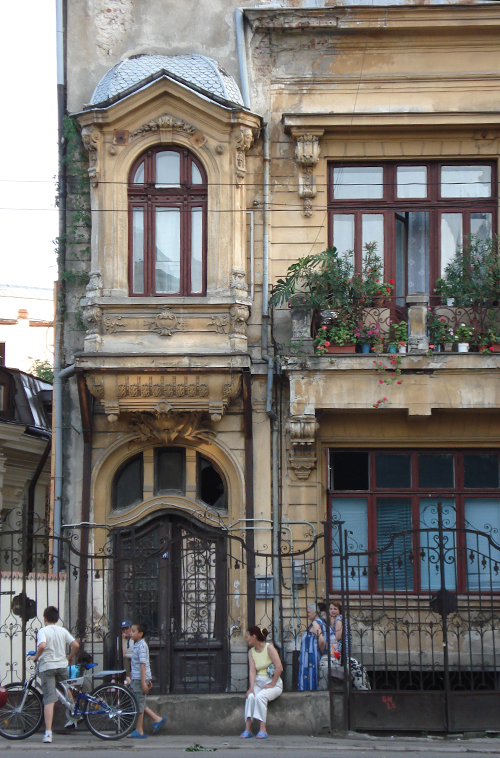 A typical Bucharest scene in the picturesque Armeasca neighbourhood: old Bucharest’s vibe is a mix of bohemian Paris and laid back Lisbon.

Now that you’re in a perfect mood and feel like dancing the night away, you can head to clubs such as Control or Expirat if you’re into more alternative rock and electro. If you prefer a club that’s more towards the posh and naughty chic, head to Bamboo or Bellagio. Let’s just put it this way: People come from all over the world to enjoy Bucharest’s nightlife. From house shakin’ electro music clubs to tango or salsa cafés, traditional pubs or Irish pubs, Bucharest has plenty for every taste.

For your travel planning – Arrival by

plane: land at “Henri Coanda” International Airport (commonly referred to as Otopeni Airport), 16km away from Bucharest. From there, you can rent a car, take a taxi or use the public transportation (bus 783 to the city centre).
car: Bucharest is the meeting point of several major roads: E70, E81, E60, E85, highway A1 and A3.
train: The main railway station is Gara de Nord (North Railway Station). From there, you can reach basically any point in town by public transportation (subway, bus, tram) or you can rent a car.