There are no Netherlands food specialties in Amsterdam or anywhere else in Holland!

The people in the Netherlands do not know how to cook! – Is a statement one hears a lot with regard to Holland food, which is of course totally false. This is something that I – my mother is from the Netherlands – can confirm wholeheartedly. Yet, Netherlands food isn’t exactly healthy, at least according to currently prevailing food guidelines. But who cares?

With this article, I would like to introduce you to the intricacies of Netherlands food specialties in Amsterdam.

Most people who visit the Netherlands will start off in Amsterdam, or make a final stop here before heading home. I would like to describe for you the things you shouldn’t miss while in Holland. And at the end, I’ll furnish you with a shopping list of Holland Specialties in Amsterdam that you should take with you to try at home, as a sort of finale to your trip to Holland.

Well then, here we go, off to eat some yummy Netherlands food!

Has cult status! It’s a must! This is how to do Holland fast food: Take any speciality, shape it, bread it and toss it in the deep fat fryer. Almost every village has a snack bar, which also offers fries and hamburgers besides the breaded Specialties. My grandfather and two of my uncles have run such businesses. The coolest is at Febo – the Netherlands’ most famous fast food chain – where you insert a coin into a slot in order to take a small treat from a compartment and proceed to eat it. You should sample these five typical Netherlands food specialties from Amsterdam and the whole country here: Kroket, Bami, Frikadel, Bitterballen and Broodje kroket. In Amsterdam, you’ll find a Febo right next to the Rembrandtplein on the street with the rails. 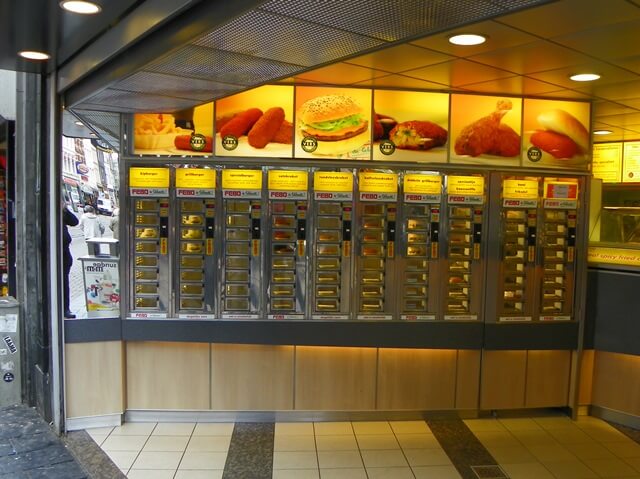 The Rembrandtplein itself is a great spot for a culinary break. It is surrounded by many inviting cafés and restaurants. 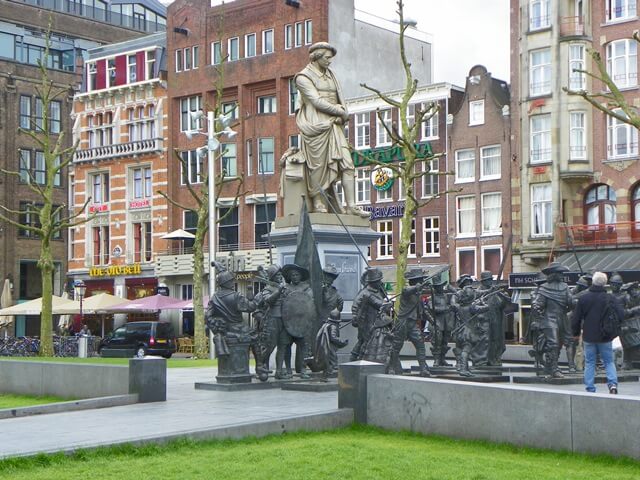 Those are the extra thick cut fries that you can only get in Belgium and Holland. Proper Vlaamse frites have to be prepared fresh. Just tossing the contents of a 1-kilo bag of fries straight into the deep fat fryer simply won’t cut it.

These are the best fries in the world, especially with the mayonnaise, which is called Frietsaus in the Netherlands, and which tastes better than mayonnaise. And since my mother is from the Netherlands – so I grew up with them – I won’t debate this either: They are the best! End of. 🙂

Most takeaway places that offer Vlaamse friet have queues for the entire duration of their opening hours. A waiting time between five and twenty minutes is unavoidable. But it’s worth it.

These always made my heart beat faster when I was a child. You should definitely try the Holland liquorice, which are called Drops in the Netherlands. Be prepared for a beyond ordinary taste experience, since some varieties of Drops contain salt as well as sugar. Once you are used to the taste though, they can be highly addictive. 🙂

In Amsterdam you could, for example, visit this shop: Het Oud-Hollandsch Snoepwinkeltje on Tweede Egelantierdwarstraat 2.

Netherlands pancakes are comparable in their shape to crepes, but taste completely different. They are another speciality you should not miss out on. You can get a taste of them at the Pancakes Amsterdam Restaurant on Berenstraat 38, for example.

Another typical Holland food in Amsterdam is the Nieuwe Haring. Those are pickled herring, served with freshly cut onion. Those of you who don’t like fish would probably rather cut off a limb than try this, but for everyone else, it’s a must. The way to eat Nieuwe Haring is to lift the filet pieces by the fin, dip them into the onions and then take a bite. A Nieuwe Haring takeaway is located at the crossing of Prinsengracht and Utrechtsestraat.

Every time our family was visiting one of the uncles on a trip to Holland, Boerenkool was served. It is a type of mash, or rather mashed potato mixed with Boerenkool (kale) with the addition of large sausage pieces, and it tastes absolutely wonderful. Boerenkool is a winter vegetable, which is why you may not be able to sample this food in Amsterdam during the summer months. You can try at the Amsterdam restaurant De Blauwe Hollander on Leidsekruisstraat 28, or one of the restaurants listed below. Just ask whether they currently have it on the menu.

Indonesia used to be a colony of the Netherlands. This has left its traces on the menus. The two things you should definitely try are Nasi Goreng and Chicken Satay. You can find those everywhere, mostly as fast food. 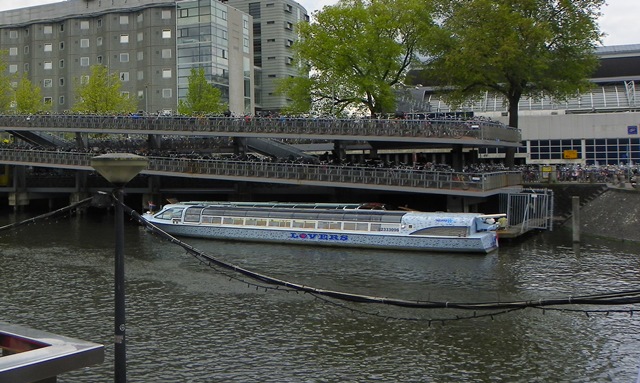 Before your departure you should visit an Albert Heijn supermarket, e.g. at Nieuwezijds Voorburgwal 226 and buy the following:

Appelstroop – a bread topping made from apples, which in combination with cheese – as odd as that may sound – tastes delicious.

Hagelslag – Chocolate sprinkles that taste excellent on buttered bread. You are best off buying a packet with both milk and dark chocolate.

Muisjes -These are pieces of aniseed covered in glazed sugar. Not to everyone’s taste.

Vruchtenhagel – It has nothing whatsoever to do with fruit! It consists purely of sugar with flavouring.

Vla – This is custard in a litre packet. The most popular flavours are chocolate and vanilla. They have to be refrigerated during transport though, which is why you may want to try them during your Holland trip.

Drops – If you enjoyed those, you can buy all sorts of flavours here.

All locations on the map

Here 50 more cool ideas, what to do in Amsterdam!

Amsterdam is easily reached by train or plane. From Amsterdam’s Schiphol airport there is a train connection, which takes you to Amsterdam Central Station (Amsterdam Centraal) in 20 minutes. All places mentioned here can be reached on foot from the central train station.

Unquestionably during the summer time, from May until September.

Become a Facebook fan of Dont worry Just travel and get article tips and other news in your facebook feed.