Want to explore what Paphos has to offer? Well here are the best things to see and do in this historical and culture-packed Cypriot resort.

The town of Paphos is located at the south-western tip of Cyprus, between the Toodos Mountains and the Mediterranean Sea. Despite the fact that it attracts scores of sun seeking tourists every year, Paphos has a fascinating history and is renowned as the birthplace of Greek goddess Aphrodite.

Evidence of the island’s past, which includes the main archaeological sites as well as most hotels and tavernas, can be found in lower Kato Paphos by the sea. The Old Town of Paphos as well as the commercial centre and industrial district are located further inland. Read more about Paphos and its history here.

But if you are planning on exploring these areas in the near future, what are the best things to see and do? Well, here is a quick guide that also includes how to get there and the best time to visit.

What can you do in Paphos in Cyprus?

Featuring a unique collection of artefacts that date back to the 2nd Century BC, the Paphos Archaeological Park is a must-see attraction for history buffs. Monuments on display include the basilica of Chrysopolitissa, the Hellenistic theatre, and the Saranta Kolones (forty columns). 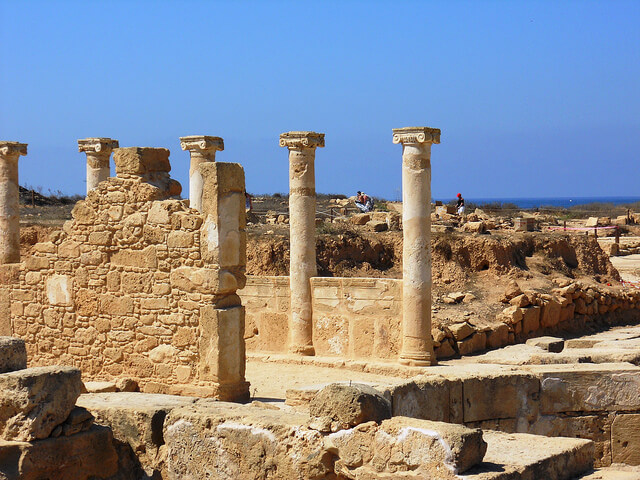 On a laid-back afternoon, head to Paphos Old Town and stroll around the local market, where you can find everything from fruit and vegetables to jewellery and lace. In addition to the arts and crafts, you can also sample some local wine, as production goes back as far as 6,000 years. In fact, Cyprus boasts the oldest named wine still being made today – Commandaria.

Visit the Tombs of the Kings

Carved out of solid rock and with frescoed walls, this is the last resting place of top officials and members of Paphian aristocracy. Although each individual would have been buried alongside their jewellery and other significant belongings, the Tombs of the Kings were looted many years ago, leaving behind a mysterious stillness. 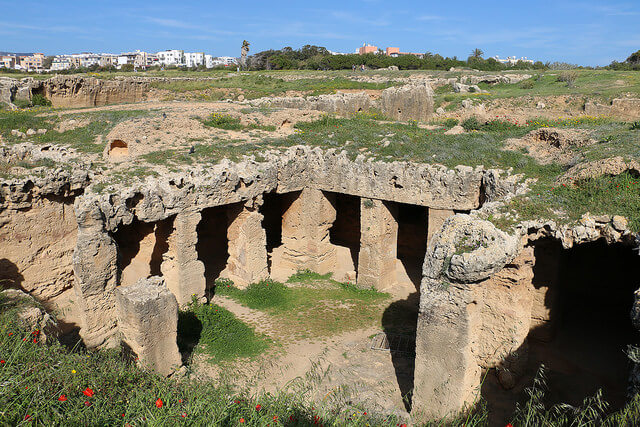 Take a walk along the coast

From the Tombs of the Kings to Geroskipou Beach there is a paved coastal path that allows you to witness Paphos in all its beauty. More adventurous types may also want to walk all the way from the airport to Coral Bay, just remember to keep cool and stay hydrated.

Both charter and scheduled flights go direct to Paphos International Airport, which is located around 20 minutes away by car from the main town. But if you are not hiring a car, buses run every hour from Paphos Airport to Kato Paphos in the summer.

You can also fly into the new Larnaca airport in southeast Cyprus. Although it is 1.5 hours from Paphos, a dual carriageway runs the whole way and bypasses the big city of Limassol altogether.

The best time to visit Paphos is either late spring (up to mid-June) or autumn (until early November). At the height of the summer season, several tourists will find the stifling heat too uncomfortable and negotiating the holiday crowds can be tough.

While some resorts will close from New Year’s to April, visiting Paphos in late winter can also be rather pleasant. Wildflower displays peak in March and you may even get away with swimming in the sea at noon too.

Are you into culture?

Become a Facebook fan of Dont worry Just travel and get article tips and other news in your facebook feed.