In the present day, as huge amounts of data are saved in huge databases in huge, air-conditioned server farms, I, as a travel blogger, would like to do my part and contribute to the systematization of all knowledge, and today I am delivering an overview over the most important tourist traps in Asia – for the countries I have already travelled – for the tourist and the independent traveller. Have fun reading these preventive travel tips! Dont Worry Just Travel delivers two new travel articles of the highest quality every week and once a month a newsletter with a summary and further highlights. Subscribe to the monthly newsletter here. Thank you!

Asia, everywhere: Taxis at the airports

Take taxis from the official queue, if you don’t want to pay twice to five times too much! If you cannot find the queue, ask someone in uniform, for example security personnel. Specifically in the Philippines, the taxi queues are sometimes located at 200 to 300 metres distance from the exits.
Source: 2010 – present – personal experience everywhere in Southeast Asia and China.

On Tienanmen Square I was approached by a young lady with a discreet student look. She said she was looking for contact to foreigners and she would like to learn more about our culture. And one thinks: Why not? When I said yes, it was off to a tea room in Beijing. It was an expensive tea room. At least I declined the offer of a private room, since that would have cost extra as well. I simply refused to pay the table fee. In conclusion: One pays far too much for tea and food. The “student” receives a commission for every foreigner she can drag in.
Source: August 2010 – personal experience

Nanjing Street in Shanghai is a very busy shopping street. And the young ladies like to combine the shopping with having a coffee and cake – if it weren’t for the lack of money. No problem! Just flirt a little with a foreigner, then ask him to invite you for a drink and when he agrees mention that two friends will be joining you as well and the party is complete. In my case the lady ran off again after two minutes because I just kept repeating how expensive everything around was. I must not have fitted into her Sugar daddy profile.
Source: September 2010 – personal experience

China, Shanghai: Approached late in the evening by a pretty lady

Upon leaving a club after midnight I was once approached by a rather pretty lady and asked to go out with her. And I thought, why not? I got suspicious when she wanted to go to a particular bar, and only that bar, a few blocks away. I said goodbye to her. An internet search revealed that the drinks would have been pretty expensive and that I – in case I refused to pay – would have been hassled and intimidated by the local muscle.
Source: September 2010 – personal experience

Attention couples and women: This tourist trap can snap shut with you inside too!
You get approached somewhere and asked whether you don’t want to witness a tea ceremony and if you say yes the ceremony itself costs a huge amount of money. And if you don’t want to pay, some muscle may be deployed or at least you are going to be put under massive psychological pressure.
Source: 2009 – here an example from the Lonely Planet Thorntree forum. 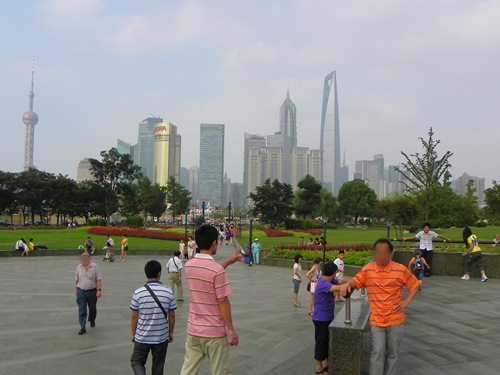 At least there are some other things one can experience in Shanghai.

At all Thai-Laotian border crossings the Laotian border guards demand a 20 Baht additional fee from every foreigner. It is illegal, but unfortunately one cannot do anything about it. What a nerve!
In Poi Pet, Cambodia, it is even worse. The Cambodian border guards there demand a steep 100 Baht and try and pluck you further wherever they get the chance.
Source: December 2013 – Laos: Experienced it myself several times. Cambodia: Read this report of Tripologist.

In the Makati quarter in Manila’s nightlife district, a man was walking close by me, and our shoulders touched. He ended up dropping his food and all the noodles were scattered on the ground. He looked at me accusingly, but I disappeared, convinced that this was not my fault. The next night I saw the guy do the same thing with some other tourists, and only then did I spot the tourist trap. But when I ran the 200 metres across it was already too late. They had already given him money in compensation. When I told the two of them that it was a tourist trap, they were pretty surprised.
Source: October 2010 – personal experience

There are taxi drivers with a manipulated taximeter, which will calculate a much too high kilometre price. But since it looks legitimate most tourists pay the inflated price. If you don’t want to experience this, tell the driver at the beginning to switch on the meter, but that you know the approximate fare and that you certainly won’t pay more than a certain sum.
Source: October 2010 – this had happened to someone in a hostel in Makati, Manila and the hostel owner enlightened us to the fact that some taxis’ meters are manipulated.

This is probably the most well known tourist trap in all of Asia! You get into a tuktuk and announce where you want to go, when the driver declares he knows an awesome tailor in the same area. Or, even cheekier – he just drives there and tells you to just quickly take a look at his friend’s shop. Another possibility, he says first that the temple or palace that you want to go to is closed in the afternoon due to a special ceremony. He perhaps proposes a visit to a gold shop, or – with male passengers – a visit to a massage parlour.
I got angry and told him to stop immediately. I gave him 50 Baht and took a normal taxi for the rest of the way.
Source: 2005 – personal experience. The other details are gathered from conversations with other tourists.

In front of some tourist attractions, in Bangkok for example the Wat Pho and the royal palace, there are self-proclaimed tourist guides, which deliberately pick their victims and tell them the attraction is closed for the day, but that they can offer a good alternative. Don’t believe a word they say and check for yourself whether the attraction is open to the public. The Wat Pho for example is open until 17:00, while last entry into the royal palace is already at 15:00 and closing time is at 15:30.
I assume that this type of tourist trap also occurs in other countries in Southeast Asia.
Source: February 2013 – personal observation and from conversations with other tourists.

One should refrain from renting a jet ski anywhere in Thailand. It appears to be the worst in Phuket and Pattaya. One rents a jet ski. Upon returning it, the owner invents damages, which haven’t been caused by the borrower, and he demands an inflated compensatory sum for the repairs. As one refuses payment one is physically threatened by the owner and his friends.
Source: 2013 – Several articles on Thaivisa.com and other expat web sites.

Unfortunately there are a lot of taxi drivers in Bangkok that want to rip off tourists. While one can simply get out of the taxi if the driver refuses to use the meter, the following example, which I have experienced personally, demands that you are a lot more on your guard. Read about it here!
Most of the time it’s about small sums. One could go ahead and just say that it does not really matter. But it does matter to me, because I want to feel respected as a human being!
Source: Since 2012 – Personally experienced this countless times myself in Bangkok.

Vietnam, countrywide: One too many zeros.

The Vietnamese dong has many zeros on its bills. So it can happen that one confuses 10,000 and 100,000, especially on the first day. Always double check that not one too many zeros is being demanded from you. And also check any change to make sure that you haven’t received one too few zeros in change. No one likes paying ten times too much or receiving ten times too little!
Source: December 2010 – It never happened to me, but somebody else at the hostel paid one too many zeros for the ride from Saigon airport.

The taxi driver gets you to a hotel with an almost identical name, but in the wrong street.
Source: 2008 – Travelfish