Trang is the name of a province and city in south Thailand. Trang city is an ideal hub to reach the islands south of Krabi. One of those is Ko Lanta, which was also my destination when I travelled to the area. Trang is best described as a typical small Thai city and I rather enjoyed my stay there. Everything an independent traveller needs is located around Trang’s train station. Hence, you could just board the train to Trang and organize all further travel once you have arrived there.

If you prefer not to spend the night in Trang, you can easily find a travel agent who will arrange a transfer trip to an island of your choice. Should you have to wait a little while, you can have a meal in one of the restaurants and take advantage of the Wi-Fi. 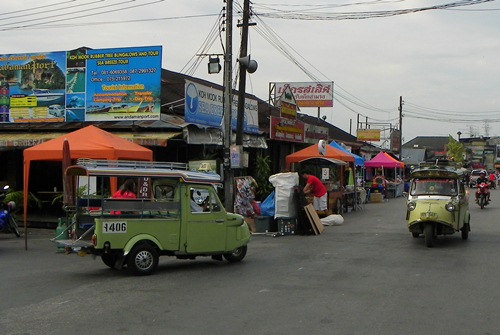 Trang’s Tuktuks have style. This picture was taken from the train station. 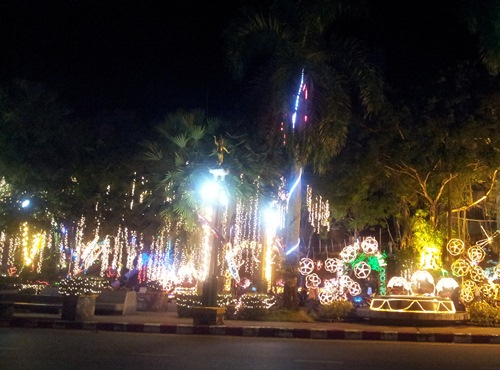 In January 2013, I found in Trang the prettiest – or perhaps the kitschiest – Christmas decorations in all of Thailand. 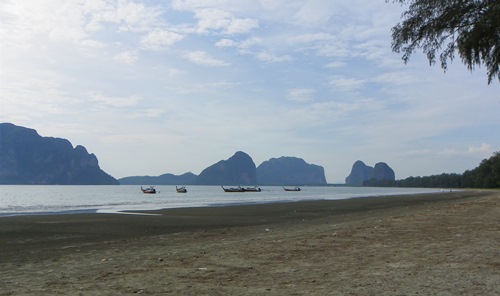 Beach near Sikao: The mainland itself also sports beautiful beaches. The sand is not as pure white as on most islands, though.

The area around Trang is populated with caves. Following the advice I received at the guesthouse, where I spent the night, I went to see the Khaokob Cave. On arrival, one rents a boat and is rowed around the cave by a local. One two occasions one has the chance to get out of the boat, and can admire the beautiful formations while on foot. One section of the cave, known as the dragon’s backbone, hangs so low that one has to lie flat in order to pass through it. While the boat moves underneath it, one can see jags, protruding from the ceiling, which are arranged along a line, and are therefore referred to as the dragon’s backbone.

Entrance to the cave. 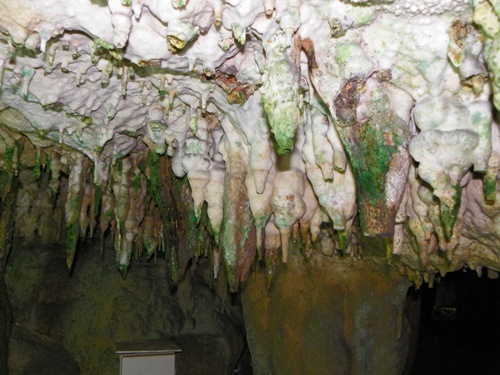 One of the stone formations inside the cave.

Waterfalls are also high in number in the area surrounding Trang. Travelling along the region’s roads, one can spot a sign pointing to a local waterfall roughly every ten kilometres. Since I was running out of time after visiting the cave, I decided to see the waterfall just by Street 403, because it was close to the road I was travelling on. Unfortunately, I forgot to jot down its name. 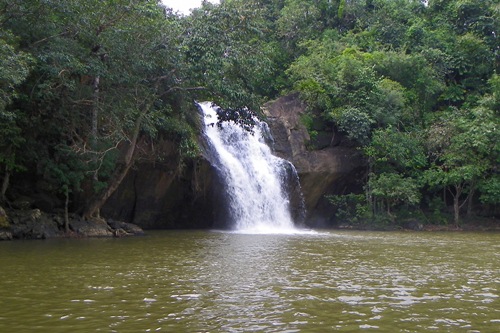 This is a simply furnished but clean guesthouse with shared bathrooms. The rooms do not have windows, just a vent with lattice (to protect from mosquitoes) to the corridor and an additional ceiling fan. However, it only costs 150 Baht per night. The guesthouse is located only 100 meters from the train station. Just opposite is a more up-market hotel, for those travellers who would prefer a little more amenities.

Ko Lanta is a divers’ paradise. I have been told that one can explore coral reefs and large swarms of fish, just off the coast. The island itself has a very relaxed vibe, allowing one to recuperate while enjoying good food. The beaches are gorgeous and free from annoying pedlars. Compared to other regions of Thailand, the island is a little more expensive. The largest and busiest beach is Klong Dao Beach. 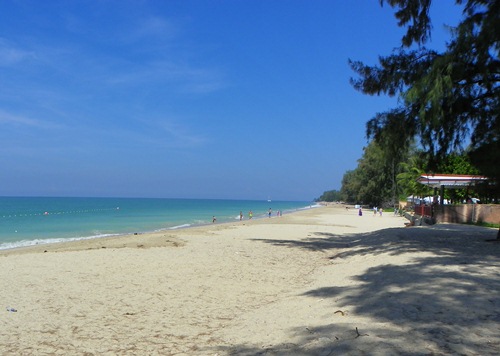 I can strongly recommend a visit to the island’s capital city Ko Lanta Old Town. It consists largely of beautiful old style wooden houses, and features a few lovely restaurants, which will make you want to prolong your stay. In addition, the pier offers a great view of the mainland and the surrounding islands. On the way to town, still on the hill, are two restaurants that allow you to take in the most amazing views and offer good food. You should definitely stop there and take it all in. 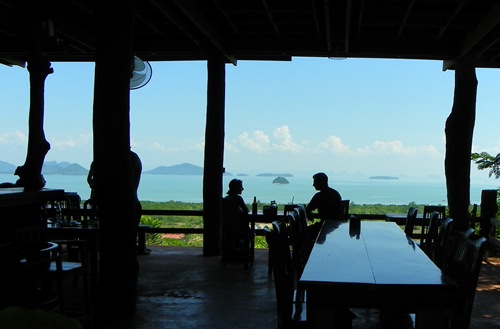 What a view! What more could one want? 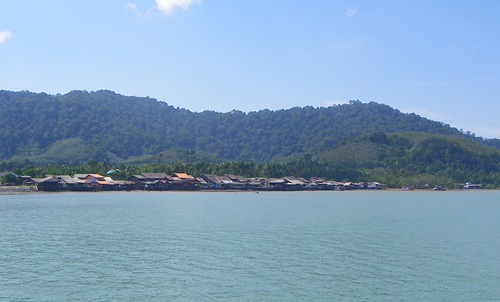 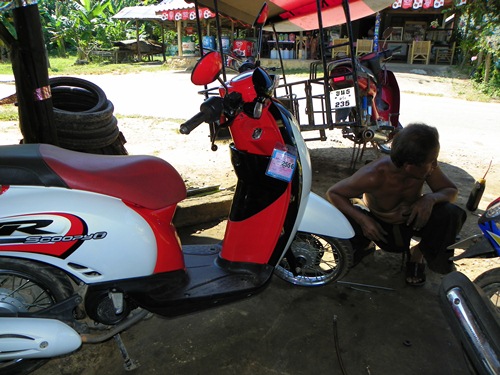 Even a puncture on the rental bike is no problem. This nice guy repaired it within 15 minutes, and for only 180 Baht. When I gave him a whole 200 he looked at me with surprise, his face lit up and he thanked me.


For the journey to Trang, I recommend taking the train. In particular, if you have never travelled by train in Thailand – it is really an experience. You get the best value for money when you book a Second Class-Aircon-Sleeper. The train leaves Bangkok around 5pm and arrives in Trang around 8am in the morning. If you are planning to travel from Friday to Sunday, you may want to book the ticket in advance. Otherwise, you can just purchase a ticket at the station before departure. The staff at Hua Lamphong Railway Station speaks decent English.

The journey by night bus is quicker and is also the cheapest option. However, the bus station to the south is located further afield, beyond the western edge of Bangkok.

For the impatient traveller: Trang has its own little airport and the flights are often slightly cheaper than those that land in Krabi. Currently (2013), Nok Air and Air Asia fly to Trang. Both airlines depart from Don Muang Airport, not from Suvarnabhumi!

by Charles  4/04/2013 2
Tags:beach, cave, island, waterfall
Comments
We use cookies to ensure that we give you the best experience on our website. If you continue to use this site we will assume that you are happy with it.I acceptMore information