Your choice for delicious Thai food in Bangkok is unlimited.

There are several things I’d like to recommend to you. This post is not limited to recommendations just on Thai food, since Bangkok is an international city.


Can be found anywhere. I’ll recommend you two areas where I’ve been.
The food items should cost you 25 to 50 Baht per piece, stick or portion. Some of the curries and fish meals can be a bit more. But certainly never more than 80 Baht. The best time to go is around 6 pm.

There you can find a big variety of Thai street food in Bangkok. It is a little touristy but still authentic.
Google Maps-Link
Start at this point and walk south into the thanon Rambuttri. Especially at the circle place before Thanon Rambuttri and in the first half of the thanon itself there is a lot of street food.
When you’ve eaten enough you can just walk to the end of thanon Rambuttri, turn left into thanon Chakrabongse and turn left again into thanon Khao San to buy souvenirs, have a few beers/cocktails or to just watch the backpacker madness.

Near Chit Lom (in the centre of Bangkok business district)

Just follow this walking tour, that I created on Google Maps
For some of the best Thai food in Bangkok take the sky-train/BTS to “Chit Lom”, then walk on the sky-bridge towards Centralworld and exit after the crossing into thanon Ratchadami on the Centralworld side. Walk straight and you find the first food stalls.
When you’re finished here, cross the road on the pedestrian bridge and walk to Thanon Petchaburi. Cross the Petchaburi road carefully (no pedestrian bridge here) and walk to the right on the left side of the road. Now some other food stalls will be on your left hand side after about 500 metres.
Once you’re finished here you can either walk back or walk into Thanon Witthayu on your right and walk to the sky-train/BTS station “Ploen Chit”.
On this tour you will also experience the bad side of Bangkok, which means lots of traffic and bad smells. But it’s worth it. Just walk slowly with no rush and enjoy some of the food. 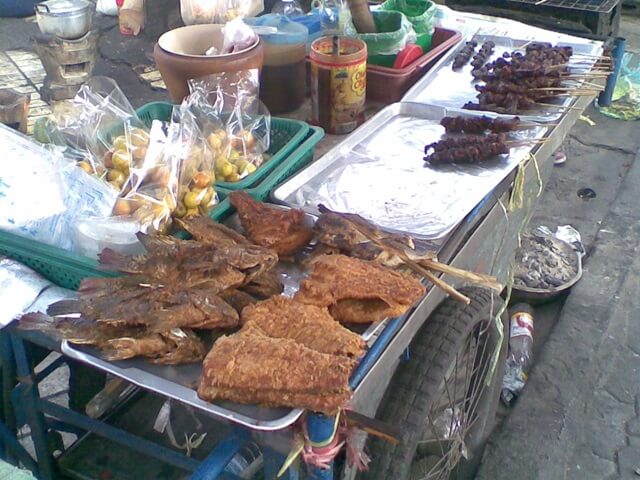 
They have an endless choice. A lot of very good Japanese restaurant chains can be found. Generally the food quality is superb everywhere.

Lots of restaurants on the 6th and 7th floor. Take the sky-train/BTS to “Chit Lom” or “Siam” and walk to the entrance over the sky-bridge.

Terminal 21 is definitely worth a look. Some of the restaurants and food shops can be found in the basement, but most are on the 4th and 5th floor. Take the sky-train/BTS to “Asok” or the subway/MRT to “Sukumvhit” and follow the signs.

Huge choice of restaurants in the basement. Take the sky-train/BTS to “Siam” and follow the signs.

Take the sky-train/BTS to “Chit Lom” and follow the signs to Central. Central is not the same as Centralworld and is just the opposite exit. Then go to the Central food court on the 7th floor. You can choose what you like and collect the receipts from the food stalls. Then find a place to sit and give the receipts to the servants. They will collect the food for you when it’s ready and serve it to you. Everyone can eat what he likes here. You can choose between Thai, Japanese, Chinese, Vietnamese, Italian, etc.

Their speciality is fried chicken with lots of fried Garlic on top. Super yummy! Besides that they serve other typical Thai dishes. And it is not visited by many tourists and a typical Thai restaurant in the sense that only the food counts and the rest is not important. So no fancy style to expect here.
Address: Soi Polo, Lumphini, Pathum Wan, Bangkok 10330
Google Maps-Link
How to get there: Take the subway/MRT to “Lumphini”, then walk to the corner of the Lumphini park and then into Thanon Witthayu on the right side of the street. After 700 metres Soi Polo is on your right and the restaurant is after 50 metres on the left side of Soi Polo.

This restaurant offers Thai food, international food with focus on pasta dishes and bakery items. Its interior design is nice and it is mostly visited by urban Thai people. So you will have an urban Bangkok feeling in here.
Address: 678/4-7 Thanon Bamrung Muang, Watthepsirin, Pomprabsattrupai, Bangkok 10100
Google Maps-Link
How to get there: Take the sky-train/BTS to “National Stadium” and from there take a taxi (40 Baht).