Recently one of my character traits – I sometimes can be rather stubborn – took sweet revenge on me. But I deserved it, and furthermore, it eventually turned out to be a fantastic experience.

I took an overland bus from Thailand’s north-eastern provincial capital of Ubon Ratchathani to Pakse in Laos. That journey commenced well, and only three and a half hours later we had crossed the border and covered the 100 kilometres between Ubon and Pakse. Since it was a Sunday, every passenger had to pay the Laotian customs officers an additional „weekend surcharge“ of 100 Thai Baht, though.

One day later, and at 9 in the morning, I asked at the reception desk of my Pakse hotel when the next bus to the area known as „Four Thousand Islands” (Si Phan Don) in Laos’ deep South would depart. The female receptionist told me, there only was one bus a day, departing every morning at half past seven. I took this with a grain of salt and was convinced that there surely must be another bus sometime later in the afternoon. I really didn’t want to wait another day as other travellers probably would have done. My stubbornness came to the surface!

So I went to the bus station and bought myself a return ticket to Ubon Ratchathani. At least that way I learned about the bus schedule back to Ubon. Ironically, it turned out that there are four daily buses from Ubon to Pakse, but only two back in the opposite direction. While buying that ticket I also told the person behind the counter, that I wished to depart for Si Phan Don’s Don Khon island at 1 pm that day. The man answered that I needed to go to the southern bus terminal for that. That was a surprise, because not one single guide book mentioned the existence of such a southern bus terminal in Pakse. Unfortunately the tuktuk, that had taken me to the present bus station, had already vanished, and I already thought I might now need to walk back to the main street in the mid-day heat to try my luck at that the southern terminal. Usually, all bus terminals in Southeast Asia are brimming with waiting tuktuks – except the one where I was at the moment. But then I realised that tuktuk drivers obviously aren’t stupid and only wait at terminals at times when a bus is due to arrive.

I was then approached by the ticket seller again. He told me I could board a bus, that would take me to the southern terminal – and I was offered the ride for free. Laotians are very friendly and obliging people, and luckily I could take advantage of that in my situation.

The southern bus terminal very much resembled the style of those found in neighbouring Thailand, except that the yard wasn’t paved. I wondered how messy that would get during the rainy season! Perhaps that also was the reason why this terminal wasn’t mentioned in the guide book, who knows. After some more questioning and misunderstandings it eventually became clear that a songthaew, already loaded with 20 passengers, would depart at 2 pm. in the direction of Don Khon / Don Det. It turned out, that I was the only foreign passenger as I squeezed myself into “the last remaining bench space” after having stored my travel bag on the roof under a securing net. It wasn’t possible for me to stretch out my legs, because between the two benches there was a dividing plank, under which cartons with energy and soft drinks had been placed. That was pretty uncomfortable, but not really surprising, because I already knew, that comfort is not the top priority in local transportation. What does count, however, is to cram as many passengers and goods as possible onto vehicles to make any given journey as profitable as possible.

Just as the songthaew was finally due to pull out, another 15 people suddenly showed up out of nowhere and wanted to hop on also. Some came running by, another two were dropped off by a car and a mother with her child was delivered by her friend on a motorcycle. Unlike other female passengers with child, she was able to take a seat with hers next to the driver in the front cabin. Among the late-comers there also was an elderly man who carried a rather lethargic rooster, whose legs had been tied together. It was very silent until it was take out of the songthaew again, when it cackled a little and flapped its wings.

When finally all passengers were on board, we pulled out, but only to stop at the nearest gas station. It seems a principle all over Southeast Asia, that the tank is only filled once all passengers have taken their seats. Ten minutes later, the songthaew picked up another four passengers, who somehow managed to also squeeze themselves into the already crammed vehicle. The driver assisted in that endeavour by ordering the rest of us to move even closer together. But I noticed nevertheless that still only 35 passengers occupied the inside of the vehicle, because four or five males had climbed onto the roof. 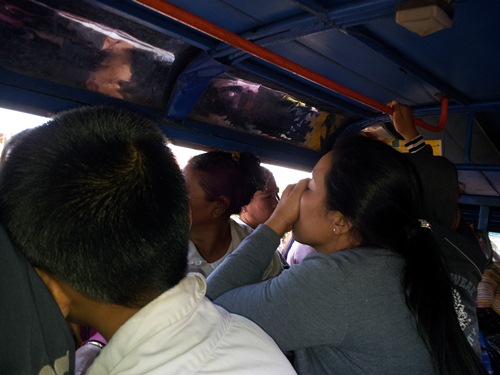 During our journey I witnessed how the mother breast-fed her child. She probably didn’t have any other choice considering the total travelling time was three and a half hours. After approximately two hours – and after some of the passengers had already gotten out – the atmosphere became somewhat more relaxed. People started chatting with one another and cigarettes were smoked profusely. At one point the subject of conversation turned on to me. Since I can speak Thai, and because Laotian sounds similar, I was able to hear a female passenger remark, that I am like four Laotians. I couldn’t resist but replying ironically that I couldn’t agree, because my body was only like three Laotians at best. By the way: People in Southeast Asia tend to be very outspoken and direct in what they’re thinking. It’s advised to take such remarks not all too personal.

During a stopover for unloading passengers and goods our vehicle was practically besieged by a horde of vendors trying to sell us some type of white local vegetable that on the inside resembles an onion. This vegetable was merrily purchased by the other passengers in bunches of 20. Grilled chicken also was offered and held inside the cabin, probably in the hope that some passengers would become hungry, but it didn’t work. After three hours into the trip I finally could outstretch my legs for the first time! That was because many of the goods stored under the middle plank were unloaded at a local stall, which seemingly had its entire weekend inventory delivered by the songthaew. Afterwards, the last 30 minutes of the trip turned out to be quite comfortable, as only about 10 passengers still remained. 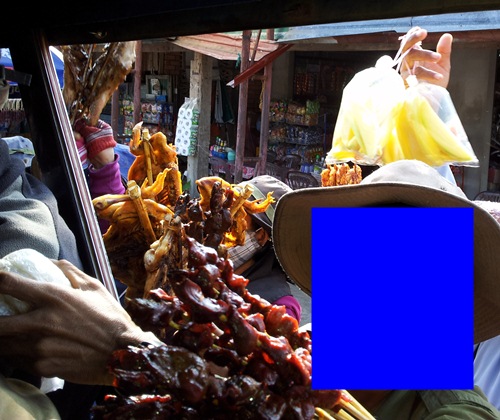 Finally we arrived at the boat pier, where I had to charter a boat for me alone, because I apparently was the only tourist with the great idea to only arrive in Si Phan Don in the afternoon. But I was rewarded with a magnificent sunset atmosphere, and that was quite something, I thought. 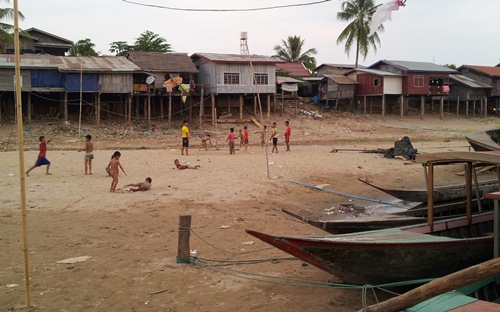 Side Note: A boat skipper, who took me out for a sunset tour a day later, told me, that the songthaew, which he had taken an hour earlier from Pakse, had only 17 passengers on board. Oh, well… 🙂