Si Phan Don is a place for relaxation. While there are Wifi-connections, everything is a little more relaxed here. It can take a good 15 minutes to download all of yesterday’s incoming emails – without any large attachments. Employees haunted by their bosses may well find the perfect excuse in this place for why they haven’t seen the past days’ urgent emails. I got the fastest Wifi connection in the Nong Sak restaurant, relatively close to the railroad bridge. There you’ll probably be able to follow Don’t Worry Just Travel on Twitter as well.
The larger islands of the Si Phan Don archipelago entice the traveller to rent a bicycle and go on a discovery tour. Later in the afternoon, one can hire a boat with a driver to explore the waters surrounding Si Phan Don. And with a little luck, one can catch the perfect sunset from a particularly magnificent location. 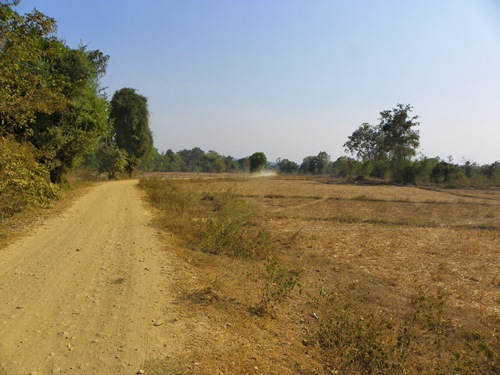 The heart interior of the island explored by bike 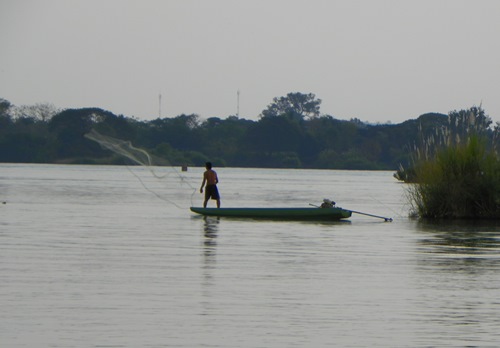 A fisherman at work 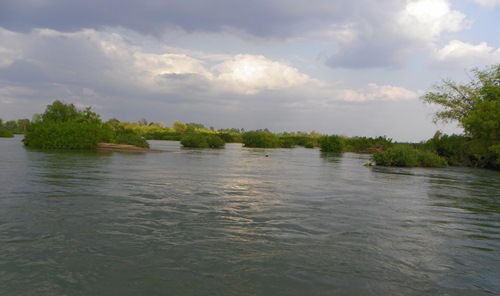 A few of the smaller islands that appear all over the river during the dry seasonTwo beautiful images, capturing the sunset mood perfectly: 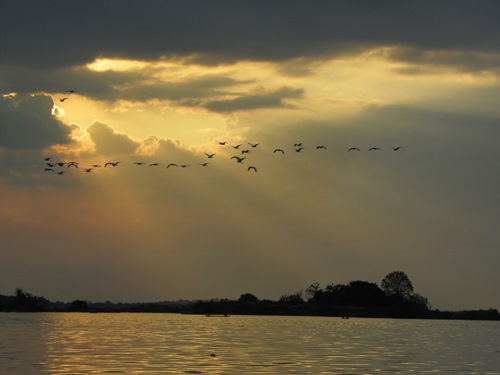 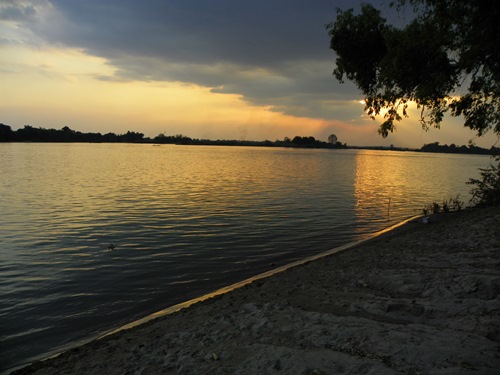 Si Phan Don translates as four thousand islands. The Mekong-River fans out in the south of Laos, very close to the border with Cambodia. Thus, within the many small rivers, islands appear: From rather large ones all the way down to tiny, one square meter islands with just a few bushels of grass growing on them. In the very south of this archipelago there are a multitude of waterfalls, over which the Mekong falls into a deeper river basin. From there it takes its course to Cambodia.
During the drought season, this river basin offers the chance to spot the same Mekong dolphins, which can also be seen in Kratie. The probability of seeing one is much higher in Kratie, though.
The largest island is Don Khong. While there aren’t many places to spend the night, the island is very calm and offers lots to see on bike tours. However, it isn’t located in the very south and to only stop here would mean missing the basin with the Mekong dolphins.
In the south are two islands, which offer tourist accommodation. The north of Don Det is frequented mostly by backpackers, who’ll find everything there that a backpacker’s heart desires. You can party until midnight.
On the side facing Don Khon, the accommodation tends to be a bit quieter. Don Khon, which was my choice, is calmer and draws a slightly more mature crowd of travellers, who have yet to lose their sense of adventure. But after 10 pm there isn’t much going on. The two islands are connected by a bridge, built by the French for the railroad. The tracks are no longer there though.
Don Khon has the advantage that in the south one has direct access to a viewing platform with great views of the Mekong basin, without having to leave the island. 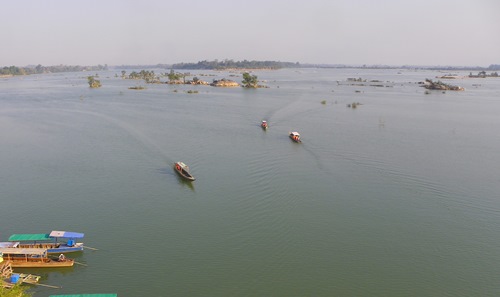 Further, Don Khon offers relaxed country living at the heart of the island, as well as the Li Phi waterfall. At the foot of the waterfall there is a small beach for sun worshippers.

From one of the travel agencies in Don Khon a half-day tour to the Khon Pha Pheng waterfall can be organized. According to signs posted at the locality, this is the largest waterfall in South East Asia with a height of 15 meters and a width of one kilometre. 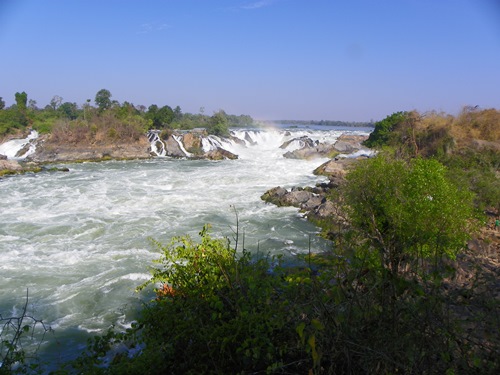 Another riverscape created by the Mekong is the Mekong Delta in Vietnam.

For your travel planning: The best time for a visit is between December and February. In November there may still be too much water left from the monsoon season – the weather at the time, however, is already very pleasant.
Arrival from Pakse: You can either take the 7.30 tourist bus to Ban Nakasang, or the one leaving from the southern bus station via Songthaew – the last one leaves at 3 pm – going to Ban Nakasang. From there, you’ll take a boat to either Don Det or Don Khon. In the afternoon you are going to have to charter a boat by yourself, since hardly any other tourists will be left. Read more about my experiences.
Arrival from Cambodia: It is also possible to get from Cambodia straight to Si Phan Don. Ask for details in Cambodia, preferably in Stung Treng or Kratie. From there you should be able to get to Si Phan Don by minibus.
How to get to Pakse: From the bus station in Ubon Ratchathani in Thailand a bus leaves at least three times a day directly for Pakse. It waits at the border until all passengers have dealt with the passport formalities. From Vientiane, Pakse can be reached after a long bus journey.