As I prepared my trip to Indonesia, I came across a note in the Lonely Planet guide, detailing the option of doing a Java Indonesia homestay in Cianjur. Another perfect adventure for the independent traveller! Here is my report.The fact that the area is supposed to be quite rural kind of eluded me on journey there from Jakarta. In West Java in particular, the streets are lined with houses, which obscure the view of the landscape that lies behind them.
Cianjur Adventure is Yudi Sujana’s project and offer excursions into the area surrounding Cianjur. It’s the perfect way to experience Java away from the tourist masses! During peak season in July and August the price for full board per night is 25 USD (250’000 IDR), a little less during off-season. The whole thing is very well organised. Prospects are laid out in the houses, describing in detail all excursions and transport connections to the surrounding cities.
A homestay is also promised, however, it isn’t one. During peak season guests are divided up in the large house, which can house around ten people and is maintained by staff, and two bamboo bungalows, which stand isolated at the edge of the village. In the large house, the atmosphere with the other guests is somewhat ok. Staying in one of the bungalows, however, is pretty lonely. There, every meal is delivered by either Yudi or a courier. Thus, these bungalows are only suited for people who want some peace and quiet and a nice view.
When I addressed the homestay dilemma, Yudi told me that a homestay would actually be possible with a family. If it is really important to you, stress the fact during your inquiry that you will only be coming for a real homestay! 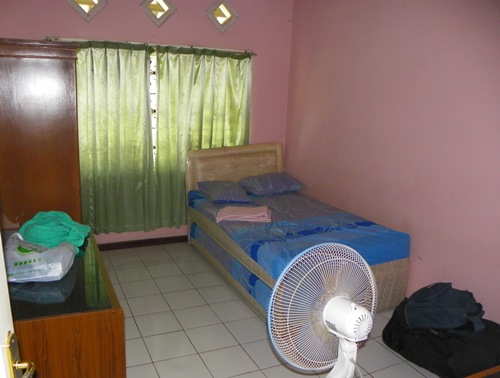 Room in the large house 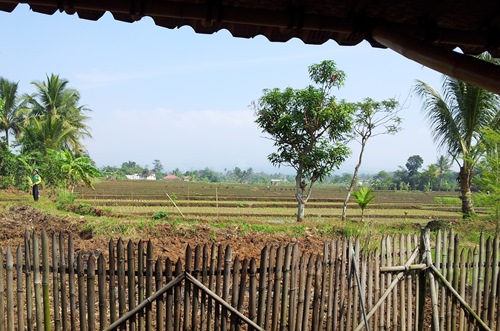 View from the bamboo bungalow

The Excursions from the Java Indonesia homestay company

At the entrance of the market is a rather beautiful mosque. 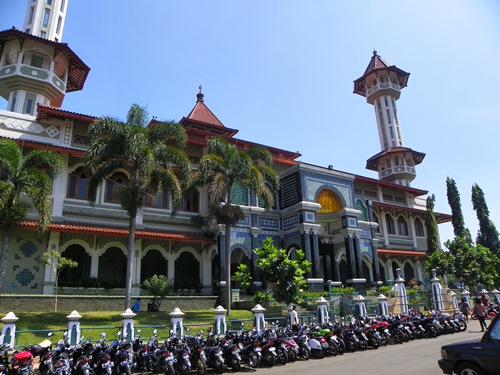 In its layout the market does not really differ from other markets in Southeast Asia.
The rice is presented in half open sacks. Fruits and vegetables are piled high in large round bowls and the meat is found on tables and hooks and one can even watch as it is being cut up right there and then. 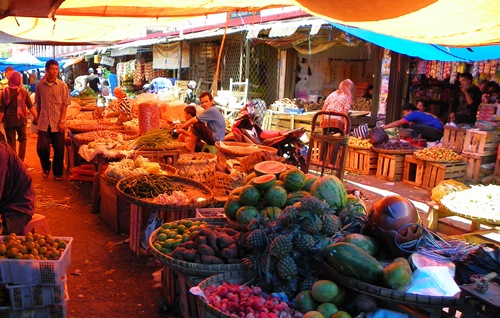 A fruit that origins from Malaysia and Indonesia is the salak, also called snake fruit due to the way its peel looks. Upon opening the fruit’s flesh resembles that of a lychee, but less juicy. The fruit tastes a little like starch powder. The salaks grow at the foot of a type of palm tree. 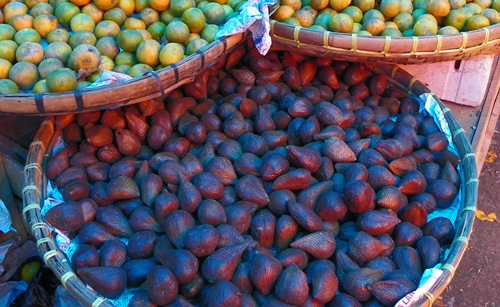 In the afternoon, hiking through rice paddies was on the agenda. From the main street one wanders first through the small alleyways in order to end up, relatively abruptly, at the end of the village amidst some rice paddies, which are lined by brooks and only interrupted by trees, a few houses and the surrounding hills. 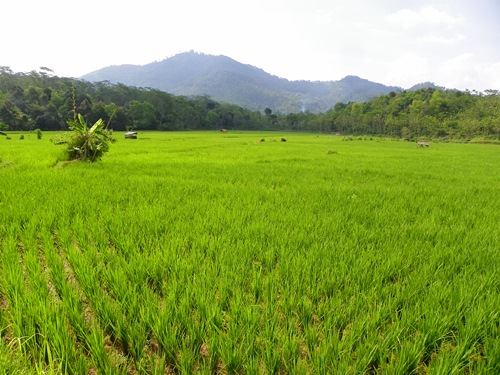 My guide was a local boy, who was about 16. We also went to some of his relatives and with a little English and some sign language he asked whether I would like a fresh coconut, to which I said yes. Quickly he climbed a palm tree and cut down two of them. I was relieved when he got back down, because he looked unsteady as he was climbing. 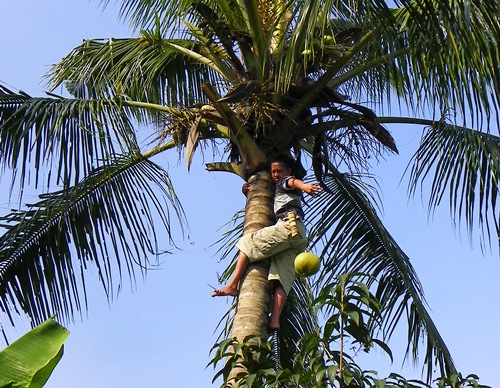 First we rode around the area for an hour on motorcycles. I felt like a celebrity since the locals kept waving and shouting at us over and over again. Afterwards we wandered around rice paddies, small plantations and now and again through some small villages, where I was always welcomed in a friendly way and with a smile. Repeatedly there were also some astonished looks, since I am tall and built broadly and someone like me passing through is probably a rare occasion.
Lunch was served in a classical wooden house in a small settlement by a hillside. Just beforehand I was able to observe the heating up and caramelisation of some palm sugar, which is then poured into a hollowed out bamboo tube until it solidifies. The final product is a cylinder about 15 cm (6 in) in height and 10 cm (4 in) in diameter. For a taste I was offered the freshly caramelised palm sugar mixed with coconut pulp and it was just delicious. 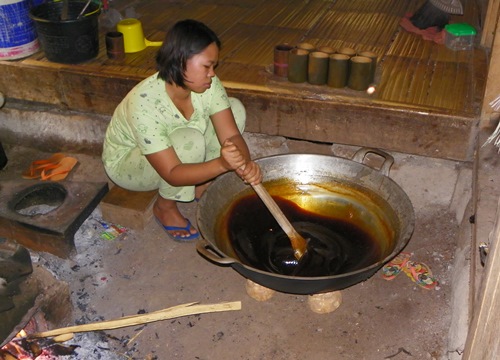 Lunch was rice with two types of vegetables and meats and tasted also really great. 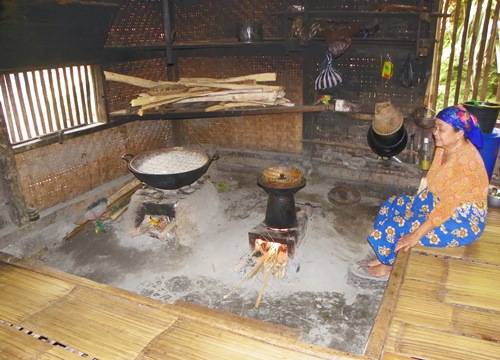 Peek into the traditional kitchen

The way back also constituted of a stroll through rice paddies, plantations, etc. but taking a different route.

Also on offer are the visit to a floating village (I found some comments online, which called this trip boring), botanical gardens, tea plantation and hiking on the Mananggel Mountain (only for experienced hikers, since the more beautiful route requires climbing a passage).

There are several ways to get there. For about 50 USD you can have a private chauffeur pick you up in Jakarta.
I decided to travel there by minivan in a collective transport, which picks up at the hotel in Jakarta and drops off at a petrol station in Cianjur, from where a member of staff picks you up on a motorbike. This costs just over 10 USD.

It is also possible to get there from Bogor or Bandung.